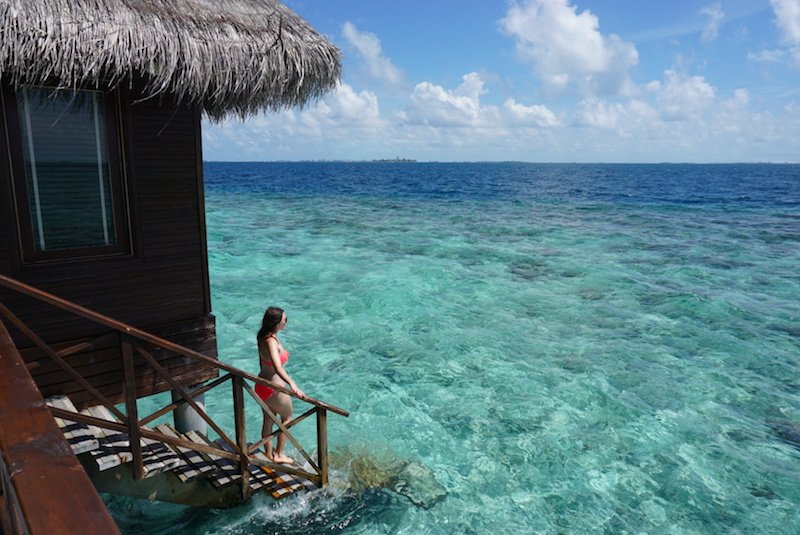 7 Things That Surprised Me About the Maldives

When I got the email inviting me to come to the Maldives for a conference, I pinched myself, wondered wildly if it was all some prank from a disgruntled blogger I accidentally threw shade at, and refreshed my email again and again to make sure I wasn’t hallucinating.

Then I promptly went out and bought the brightest bikini I could find, because retail therapy is for good things too, no? 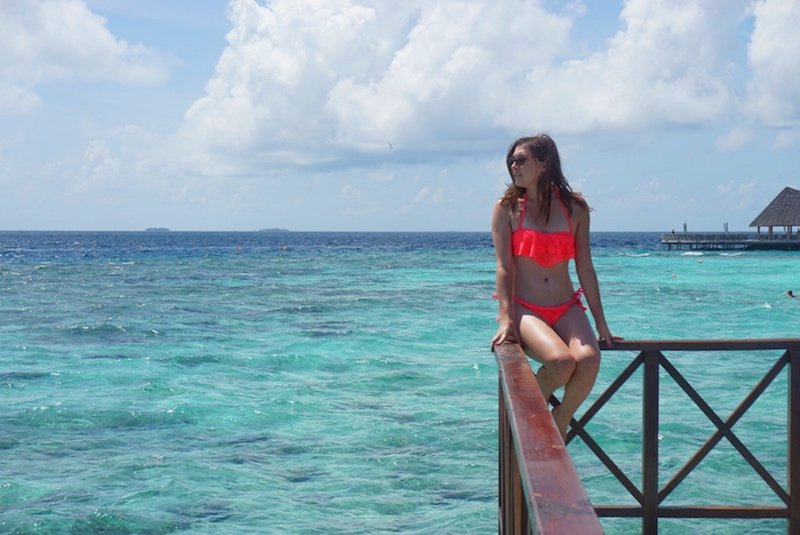 I spent two weeks in the Maldives… and I still can’t even believe I just wrote that sentence. The Maldives has always seemed so inaccessible to little old me: too far, too expensive, too romantic. It was a place I always thought I’d save for later — a place I wasn’t yet ready for, that I’d go to when I was rich, successful, and in a fabulous relationship. 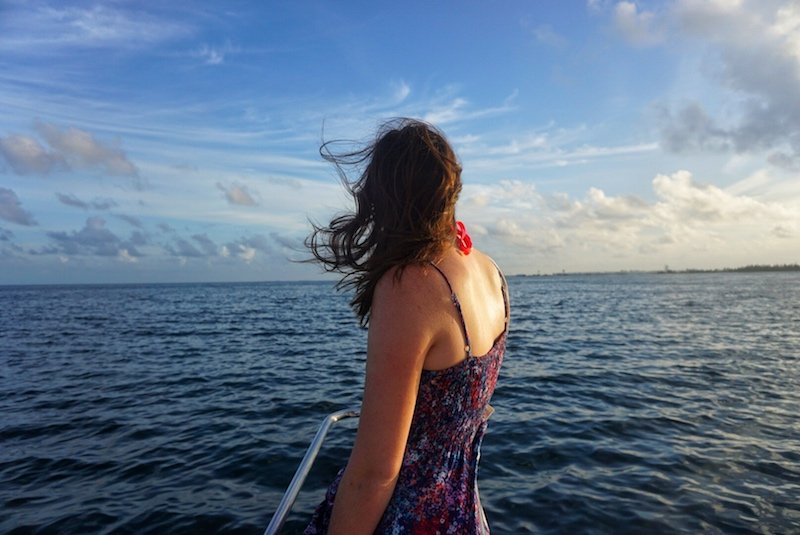 As I spent more and more time in the Maldives, I began to understand a bit more of what makes this island nation so unique and surprising.

While you may think of just perfectly manicured rows of bungalows, as always, there’s more to the story. Two weeks visiting just 5 islands in a chain of over 1200 isn’t much, but bit by bit I began to chip away at the postcard image of the Maldives to discover some surprising things about this ocean paradise. 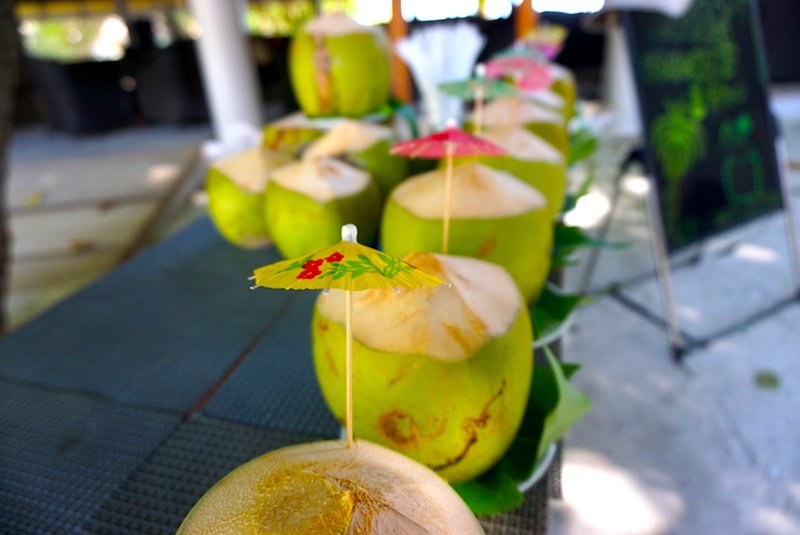 1. The huge difference between local islands and resort islands

The islands of the Maldives can be split into two distinct categories: resort islands and local islands. When you think of Maldives, it’s far more likely that you’re imagining resort islands: overwater bungalows, fancy cocktails, and that brilliant aquamarine water — only the last of which you’ll find on the local islands. 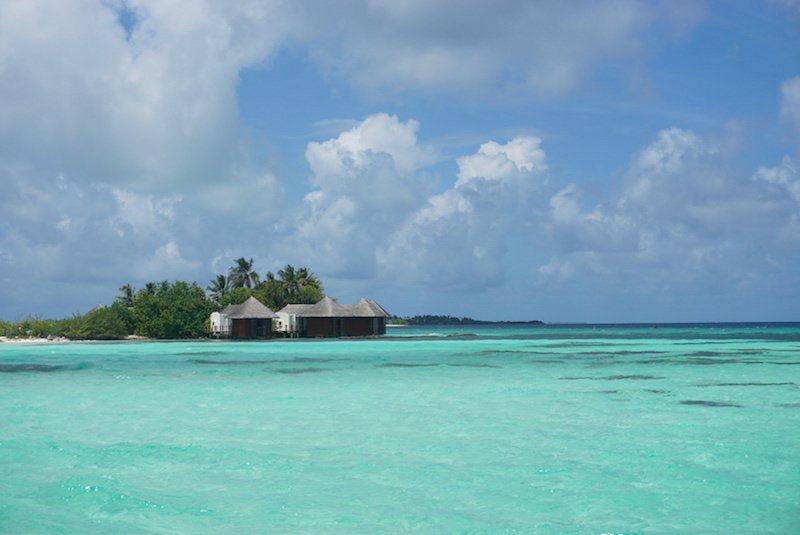 I’ll readily admit I didn’t spend much time on the local islands — the idea of going weeks without alcohol is nearly enough to induce the shakes (oops did I actually admit that?! sorry, Mom and Dad and everyone you tell to read this blog) — but next time, I’m planning on exploring more of the local side of life, booze be damned.

I did a day trip to Huraa, a local island near Male, and found the waters to be super beautiful with colorful houses everywhere — it’s definitely tempting to come back and visit properly in the future, and since Airbnbs start around $40 per night for a guesthouse… it won’t break the budget, either. 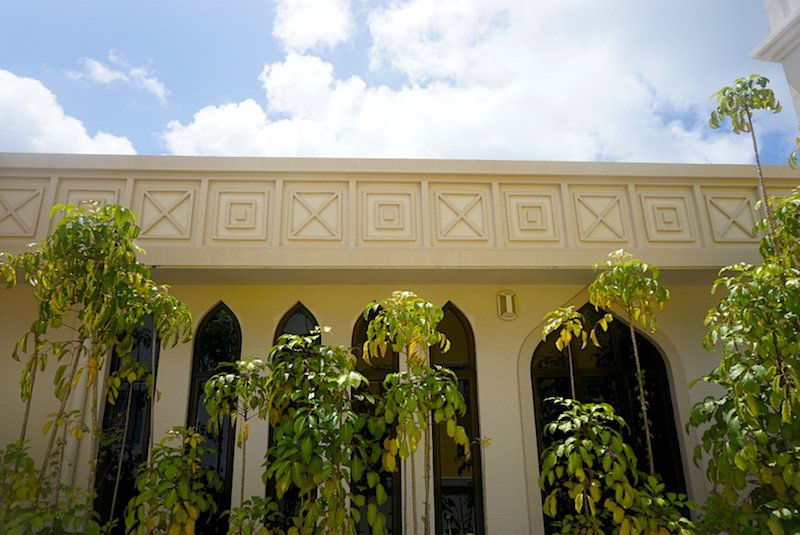 The difference between local islands vs. resort islands is so noticeable because the Maldives is a strictly Muslim nation — except when it comes to privately owned islands, aka the resorts. On local islands and in the capital, there isn’t freedom of religion; pork products and alcohol are banned; women dress quite conservatively.

Meanwhile, in Maldives resorts, you’ll often find non-halal food, plenty of alcohol, and bikini bottoms so small they’ve nearly been absorbed by the person’s buttcrack (no disrespect, I wish I could rock that look). 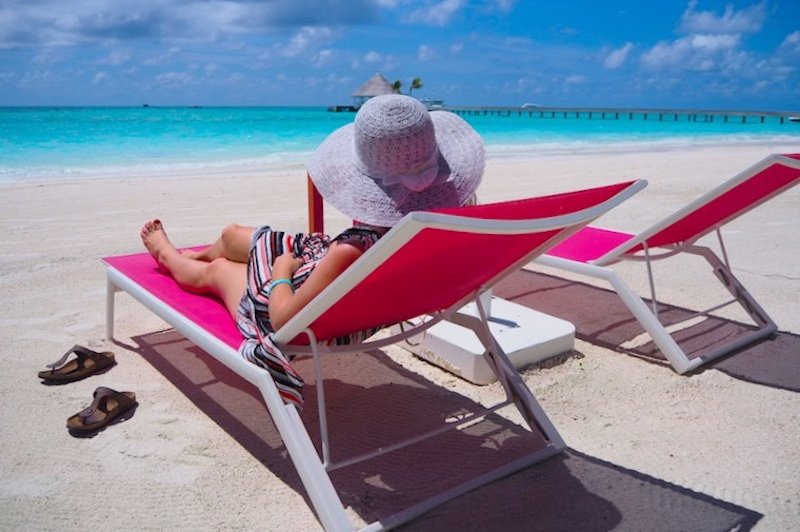 If you’re traveling only to the resort islands, this won’t matter much. If you plan to spend any time on the local islands, it’s best to keep this in mind so you can respect the culture and not be caught off-guard.

2. The resorts aren’t just for honeymooners

I always kind of thought that the Maldives was a honeymoooners’ destination and not much else — that if you weren’t taking romantic jacuzzis or rocking the bed with your fellow newlywed, you’d be shit out of luck for things to do in the Maldives.

Well, this is so not the case — and thank god for my forever-single ass, because to think that I’d have to wait for Prince Charming to swim in those blue blue waters is low-key heartbreaking. 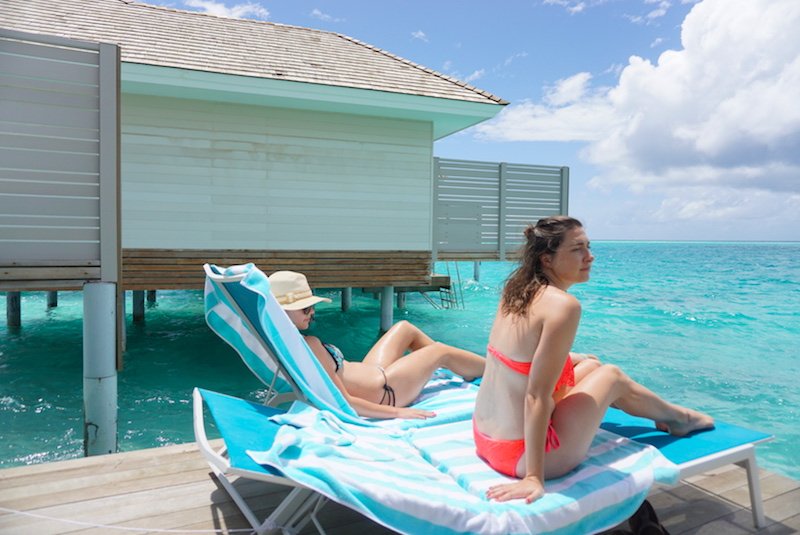 Sure, the people surrounding me were predominantly couples, but very few in-your-face newlyweds. More common were small families and groups of friends, meaning that I didn’t feel out of place during my time visiting different resorts in the Maldives.

3. The Maldives is doing its best to be sustainable, but it’s unclear if it’ll be enough

According to some estimates, the Maldives will either lose 77% to nearly all of their land by the end of the century. The Maldives is the flattest nation on Earth — its highest point is not even 3 meters above sea level — with 80% of its land lying a meter below sea level. As such, it’s especially susceptible to global warming and rising sea levels.

Despite this, Maldivians have their eyes locked on a hopeful future. New resorts are springing up; plans to expand the airport and encourage industry on these islands are in the works. For being the flattest nation in the world and 99% water, Maldivians don’t seem particularly worried about the rising sea levels — or if they are, they’re doing a good job faking it. 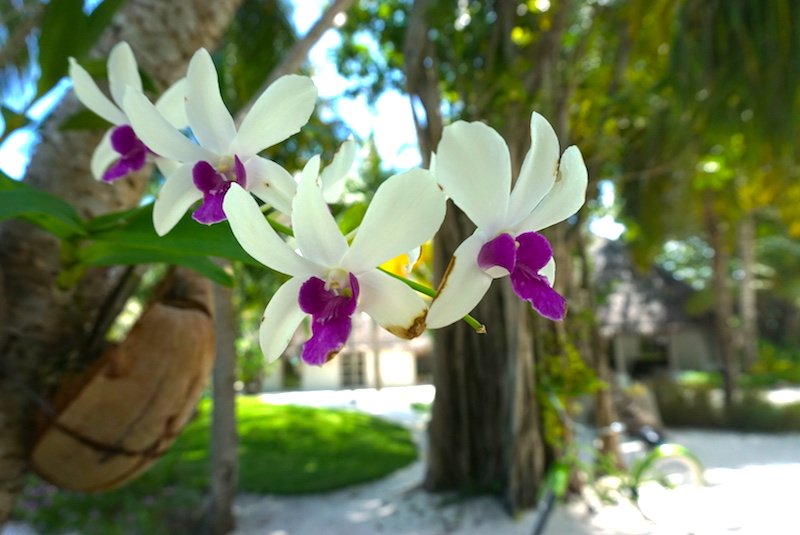 That said, many of the resorts are doing a lot to be sustainable. Two of the four resorts I stayed at (Bandos and Kanuhura) have water bottling or desalination plants right on island, drastically reducing their use of plastics by providing drinkable water in reusable glass bottles instead. Virtually all Maldives resorts have their own waste management and water treatment facilities on island.

As admirable as these steps are, though, these are small steps undertaken by a population of 400,000. No matter what Maldivians do to be more sustainable, the continued existence of the Maldives is contingent upon slowing the rising sea levels. That means their future is essentially in the hands of much more populous and wasteful nations such as the United States, India, and China, which is why we must continue to agitate for change, sustainability, and science in our home communities. 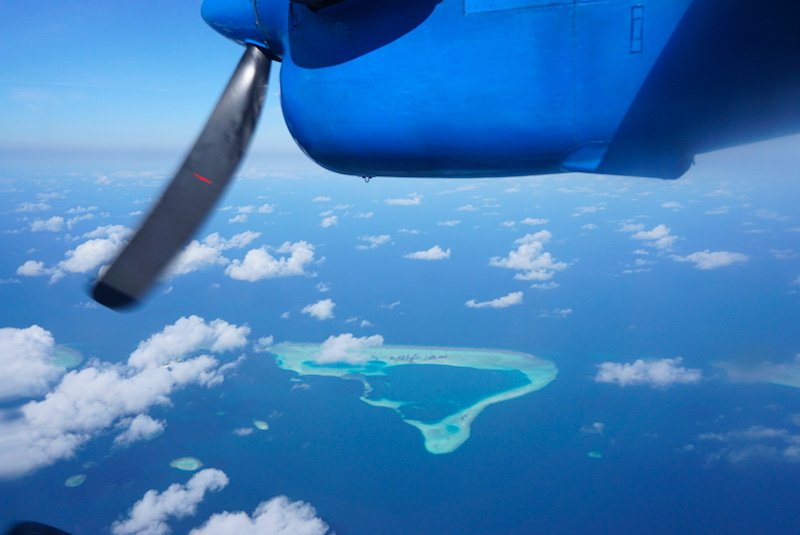 4. The Maldives has its own language and writing system

If you’ve ever had the dubious pleasure of talking to me for more than 10 minutes, I’ve probably managed to drop in a reference to the fact that I’ve learned more than one language. Yes, I know, I’m just that charming.

The Maldivians speak a language called Dhivehi, which is related most closely to Sinhalese, the language of Sri Lanka — which makes sense from a geographic perspective.

Dhivehi is written in a unique script found nowhere else on Earth. The script is called Thaana, and it’s written from right to left, similar to Arabic. Some of the letters derive from Arabic numerals; others from other numeral systems. Cool, right? Just me? All right, let’s move along here…

5. The water really is that blue

Honestly, a photographer never has an easier day than a sunny day in the Maldives. It’s almost criminal to post-process those photos.

Counter to everything you’ve been taught about photography, the trick to good photography in Maldives is simple. Shoot in daylight, best between 10 am and 2 pm. No need for golden hour here: the water looks its best with the sun directly above it. And for god’s sake, keep your hands off the saturation slider. There’s no need. 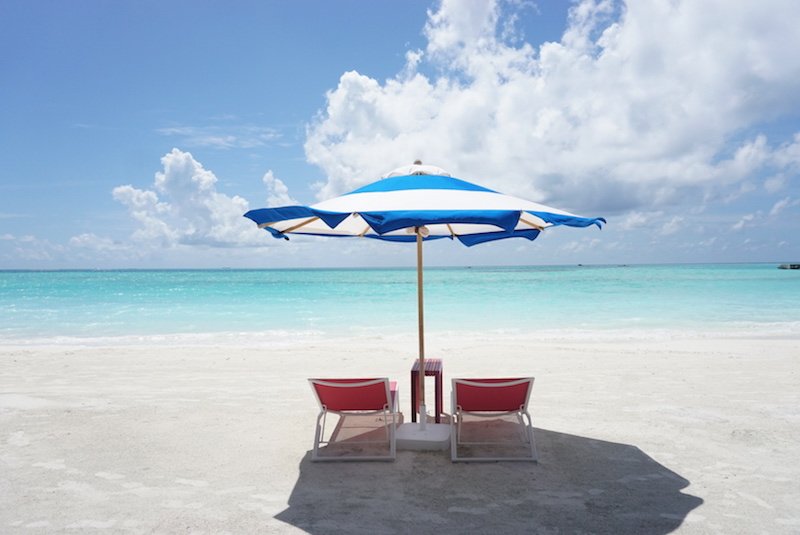 6. It isn’t exclusively for the rich

Maldives will never be a “budget destination” in the way that Thailand and Indonesia are. Dorm beds don’t exist, but guesthouses on the local islands start from as little as $30 or $40 a night for a double room. Meaning that if you travel with a friend, a shared room in paradise will only cost you about as much as a dorm bed in many parts of Western Europe. In fact, it can be done on a budget of about $60 per day. Crazy, right? 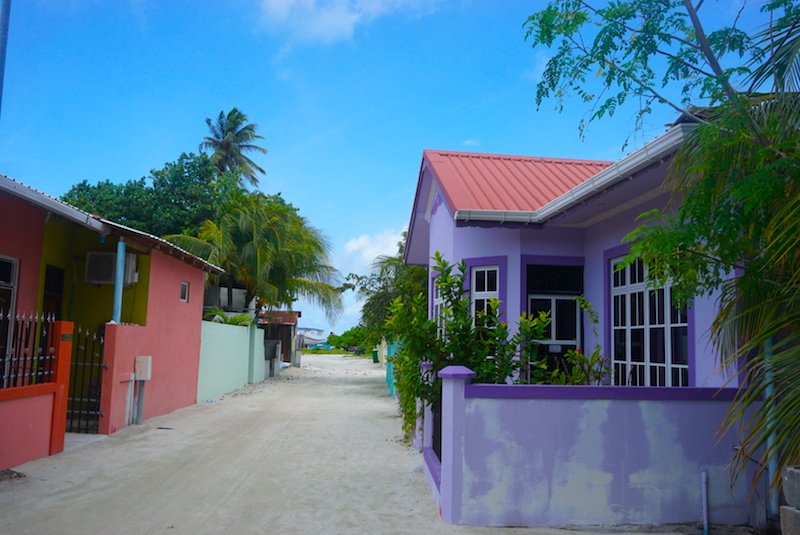 Ferries to the local islands cost from $2-3 from Malé, the capital. Once you’re on a local island, prices are fairly standard — think $1 for a coke or bottle of water, and anywhere from $5-10 for a meal.

Activities such as diving in the Maldives can cost a bit more, but are still fairly affordable. My friend Janet did a fantastic breakdown of Maldives trip costs on all kinds of budgets, so check her post out for further details.

I didn’t know what to expect when it came to Maldivian food… oh, was I in for a treat.

Warning – if you’re not into seafood or spicy food, take a seat in the back. This one isn’t for you… so step aside so I can have unimpeded access to the buffet, thanks. 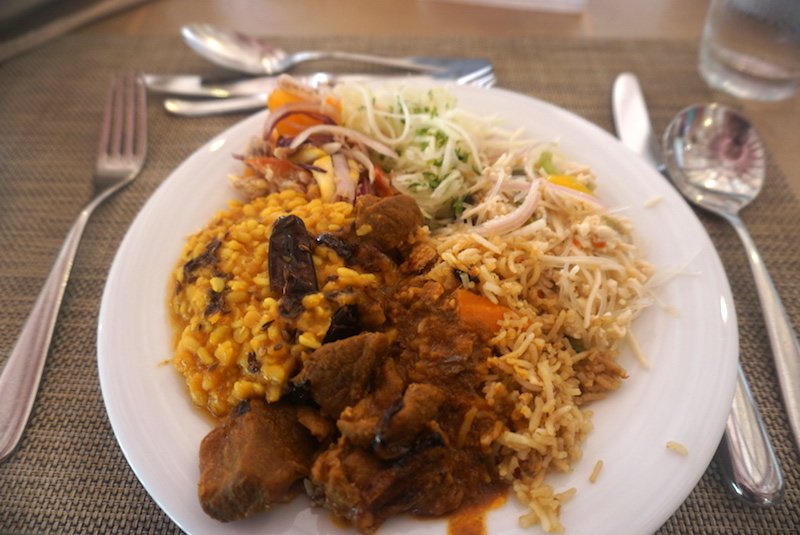 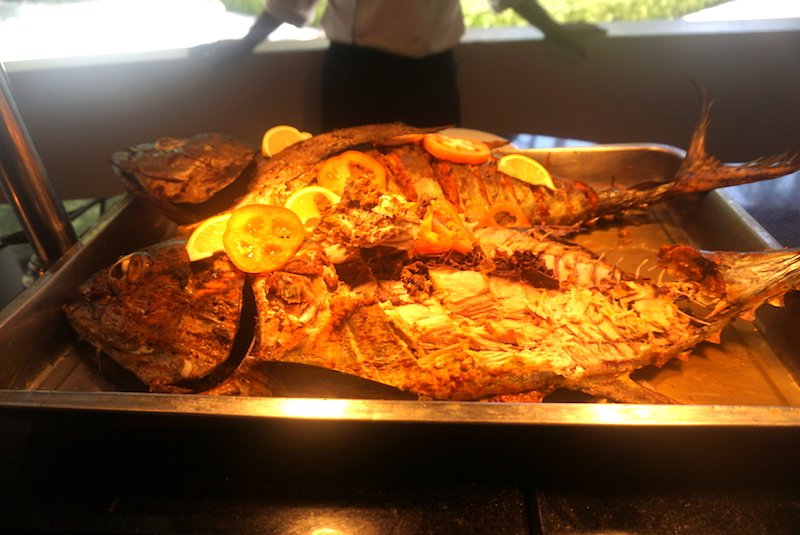 Maldivian food is influenced by Sri Lankan and Indian cuisine – as in, lots of curries and spices. The Indian flatbread roti is called roshi here, and it’s eaten with most meals, especially breakfast. Maashuni is another typical Maldivian breakfast food: flaked tuna with shredded coconut, onion, and chilis. Fish for breakfast? Don’t knock it ’til you’ve tried it.

If you’re not into spicy food or fish, most resorts will have some mild and Western options for you. But if you have an adventurous palate, you’ll fall in love with the flavors of the Maldives.

Note: My trip to the Maldives was sponsored by the World Travel Writers’ Conference and Maldives TV. All opinions are my own. 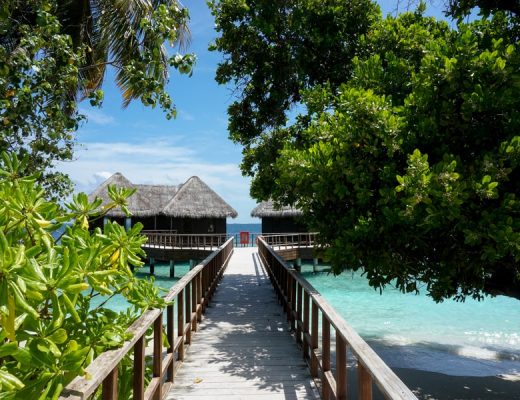 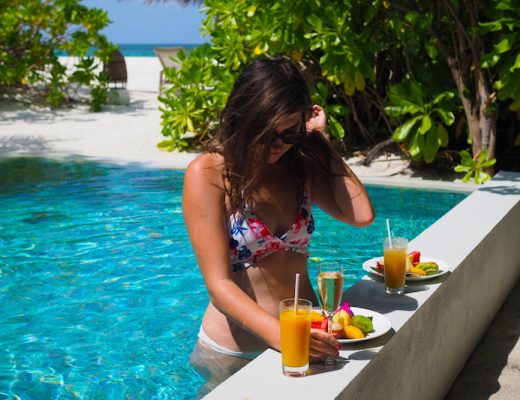 Take Me Back to Kanuhura

January 14, 2018
Previous Post The Magic of the Blue Eye, Albania (Syri i Kalter) and How to Get There
Next Post Exploring the Wines of Turkey in Bodrum