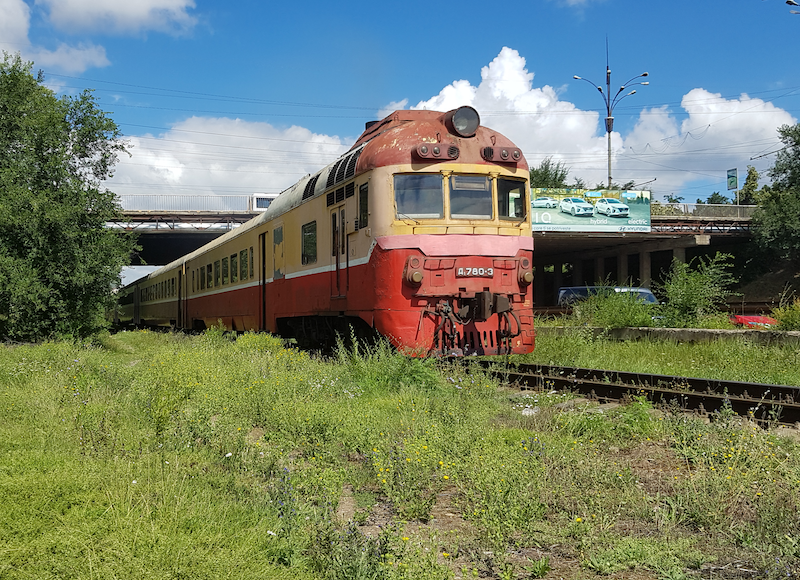 Chisinau to Kiev by Train: Well, That Was a Trip

Despite being separated by a mere 500 kilometers of distance between the two points, taking the Soviet-era sleeper train from Chisinau to Kiev took a whopping 18 hours.  And would I recommend it? Yes, yes, and yes again.

Taking an ancient, glacially-paced train — a train older than either of the two countries it was going between — was probably one of my highlights of visiting Chisinau.

Though to be fair, that’s because the majority of my time in Chisinau was spent navigating the hospital system attempting to get a rabies vaccination after a cat bite incident in Odessa… but that’s a story for another day, and it’s most certainly not Chisinau’s fault that I didn’t get around to doing most of the best things to do in Chisinau.

Nor is it Chisinau’s fault that I didn’t take out my proper camera and took only crappy cell phone shots the entire 3 days I was there… but I digress again. 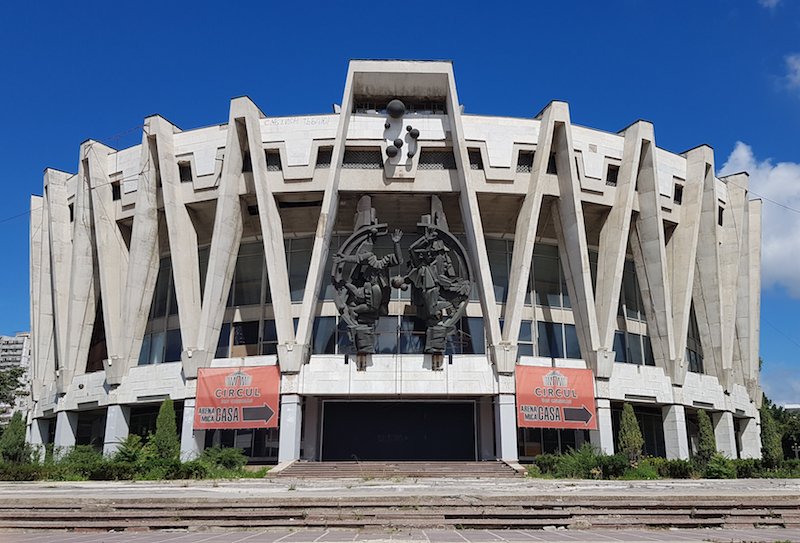 Sadly, this is the ‘best’ photo I have of Chisinau

Not a ton of travelers opt for this train due to time and budget concerns and a lack of information out there, so I’ve broken down the information that was missing on the internet here  to help people who plan to make this journey between Chisinau and Kiev by train in the future.

Bus vs. Train? Breaking Down Getting from Chisinau to Kiev

Upon arrival at my hostel in Chisinau, I was given a map with the arrival and departure times of buses. Traveling by bus from Chisinau to Kiev is by far the more popular option. But after a memorable #Experience in Romania and the marshrutka from hell from Ganja to Sheki in Azerbaijan, I’m a bit allergic to bus travel.

So when given the option between a 10 hour overnight marshrutka to Kiev and a sleeper train of indeterminate length and roughly twice the price… I opted for the train in a heartbeat, not even thinking about the price. 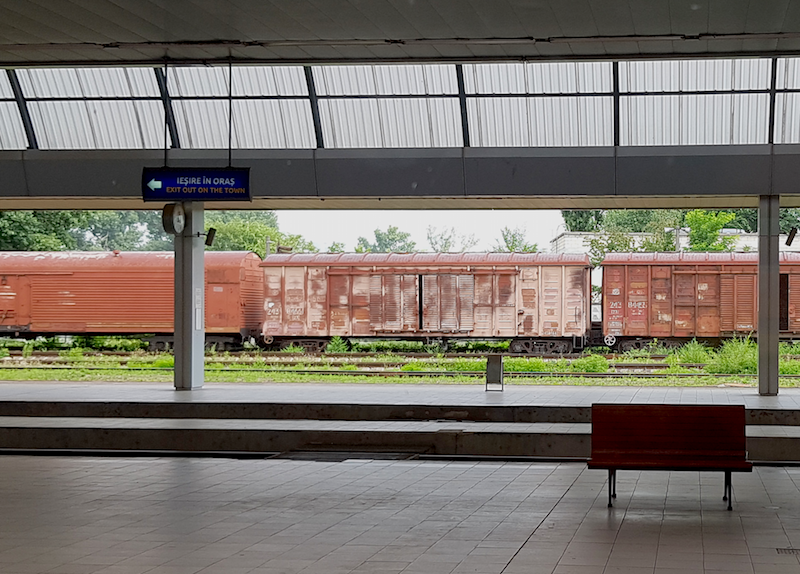 The train station in Chisinau is a happening place

The train journey is not the popular choice because it is both a longer journey (in my case, nearly by twice the time) and it’s more expensive. I paid 650 lei for my bed in an open sleeper car, whereas a bus ticket will cost around 300 lei. A bus takes approximately 10 hours between the two cities, and my train took 18 hours.

Attempting to purchase a train ticket between Chisinau and Kiev is a little intimidating because the people at the train station ticket counter don’t speak English. Knowing a tiny bit of Russian will help. I speak Russian with the complexity of an early toddler and through that and some gesturing I was able to get a ticket for the train to Kiev.

If you don’t speak Russian, I recommend asking your hotel or hostel receptionist to write down what you want in Russian or Romanian. Barring that, you could always use Google Translate if you have a SIM card or the language file already downloaded on your phone to use offline (guide how to do that here). This is highly useful for traveling through Russian-speaking parts of the former USSR. This tip also came in handy in Taiwan when I had to translate Chinese as the camera can automatically ‘translate’ things, making you feel like you’re from the future. 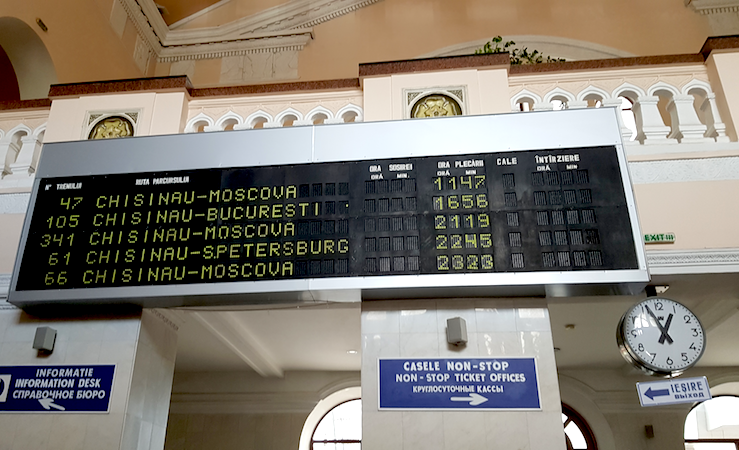 The departure times between Chisinau and Moscow as of July 2018.

However, in my bumbling Russian, I was able to get what I wanted across. There were three departures on the day that I booked my ticket, all heading towards Moscow and making stops in Kiev along the way. Despite the ongoing war in Donbass between Russian and Ukrainian forces, trains are traveling between the two countries as scheduled.

The woman at the ticket counter told me my train was due to arrive the next day at around 15:00. I’m not sure when the other two trains would arrive in Kiev. Theoretically, according to an out of date blog post, the morning train would arrive somewhere around 2 in the morning, whereas the 23:00 train arrives past noon the next day.

Comparing those times to my experience, I’d say those times are off, though. Unless it follows a very different route or I accidentally took a train with countless local stops and the other train is an express train, I have a hard time buying that. I’ll leave that gap for other intrepid travelers to fill in – if you find out, comment below and I’ll update this post accordingly. 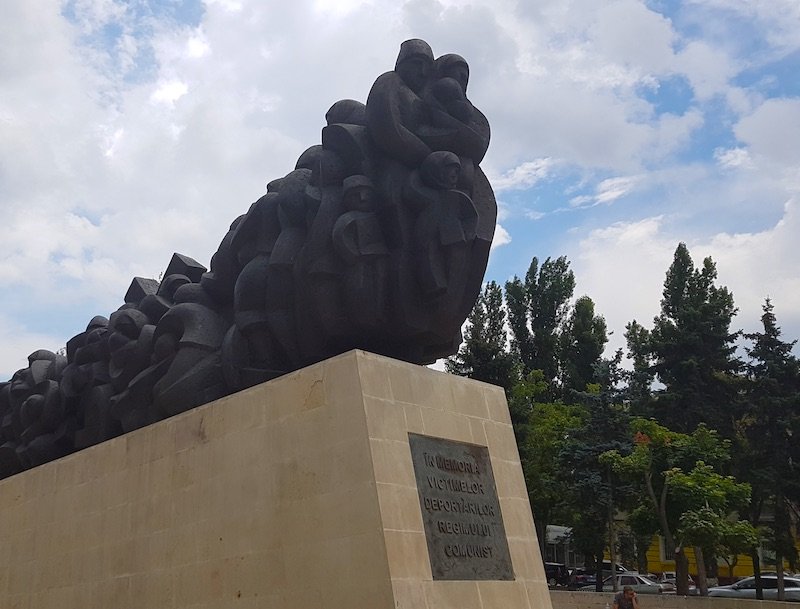 When at the train station, be sure to check out the Monument to the Victims of Stalinist Repression in front

All Aboard the Slowest Train of Your Life

From start to finish, it took a whopping 18 hours to span 500 kilometers, including a perplexing 9 hours to traverse Moldova… which, given the size of this tiny landlocked country, practically defies physics. 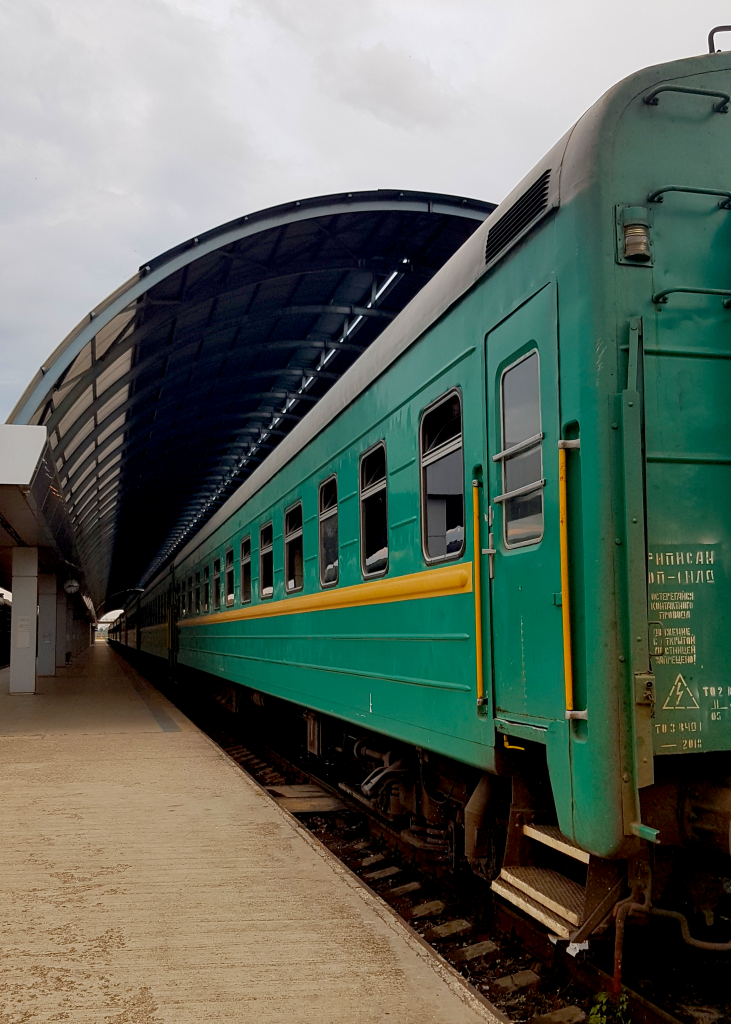 On Soviet train, Moldova leaves you!

The train departed at 21:19 exactly on schedule and chugged along through Moldova making countless stops, finally reaching the border with Ukraine around 6 AM. Luckily, unlike the night train to Istanbul, all the passport-checking takes place on board the train.

The train itself is spartan but functional, as befits a Soviet-era train. The train has bunk beds, where the bottom level has a luggage compartment underneath it that can be lifted up. The top bunks can be folded away and typically are, as it’s rare for the train to hit capacity (no need to buy tickets in advance save for the fact that the ticket line moves quite slowly). There are also bed/seat combinations on the side, so that each “section” can fit 6 people.

You’re given two sheets, a mattress pad that is actually quite comfortable, a pillow and pillowcase, and a towel if you’d like to wash your face or something on the train. There is hot water available and you can borrow glasses to drink tea or coffee out of (I assume you have to bring it yourself — my nice seat mate kindly shared his coffee with me in the morning, because people are angels). There was a restaurant car on my train in theory, but I didn’t check it out personally. The bathroom was actually one of the cleanest I’ve seen on a train, though of course, it’s strictly a BYO TP and hand sanitizer kind of affair. 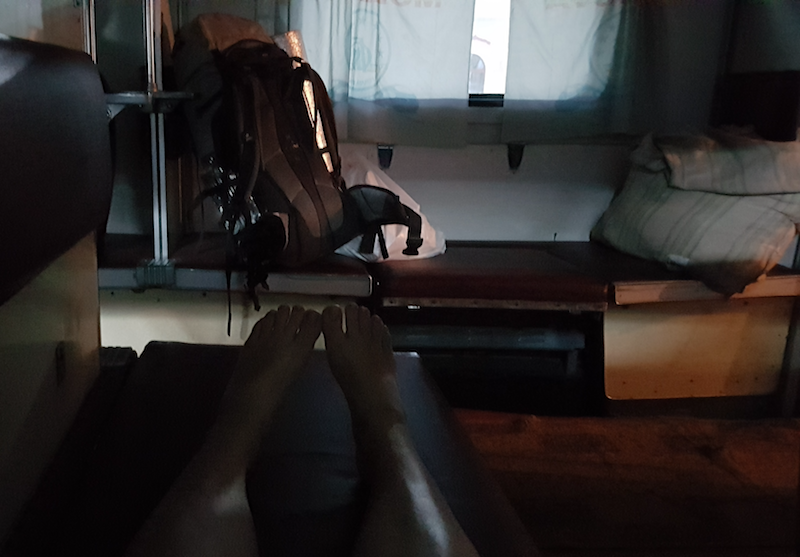 One of the few photos I took on the train.

I wish I had taken better pictures but I am a shitty wannabe train blogger. I blame the combination of boarding a pitch black train, drugging myself in order to sleep, and then having a series of weird encounters with border officials and random people as soon as I woke up.

I arrived in Kiev around 3:10 PM the following day, pretty much exactly on schedule – if not a few minutes early.

Crossing Between Moldova and Ukraine

I exited Moldova with only a slight hitch. My border stamp, which I got at the Palanca border crossing commonly used between buses between Odessa and Chisinau, was so faded it almost looked as if it weren’t there.

I heard a flurry of a language I couldn’t understand with the words “Tiraspol” being bandied about — evidently, they thought that given the lack of entry stamp, I had entered via Transnistria. Eventually, they were able to detect the tiny hint of a Moldovan entry stamp (side note: I really hate it when this happens) and I was given my exit stamp.

After a quick and awkward pause for customs entering Ukraine (in which I thought I was being asked to get off the train because, again, toddler-level Russian, and began to change out of my sleeping shorts in front of a border guard), they quickly checked my baggage and ascertained that I hadn’t brought in too much alcohol in from Moldova.

I then waited for the Ukrainian passport control to come and stamp me in. The guards made some awkward comments on my appearance (oh, the joys of traveling while female) and then proceeded to ask me if I was sure if I didn’t need a visa to enter Ukraine (despite the fact that my entry stamp into Odessa a few days back was staring them right in the face). 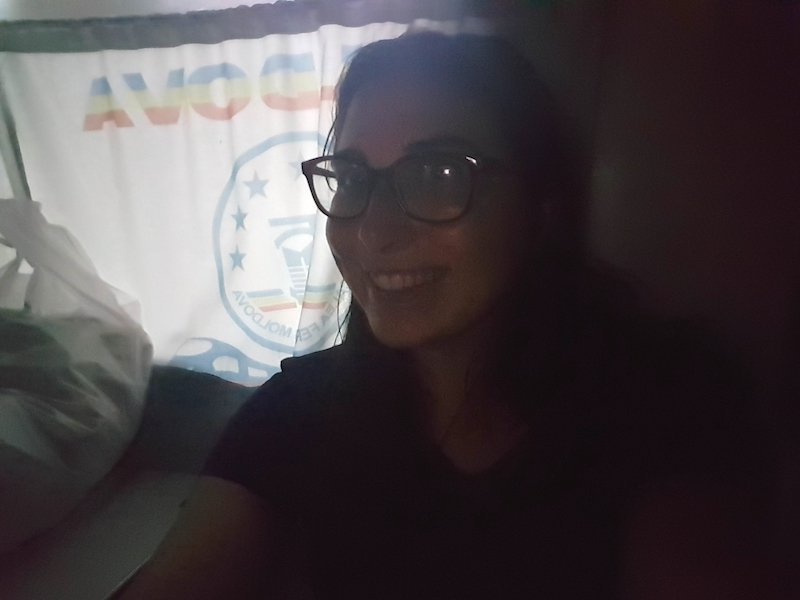 This is the happy face of someone who didn’t take a bus.

All in all, it was a less pleasant experience than the super-smooth Palanca border crossing from Odessa, which had free Wi-Fi as well as the only land border Duty Free shop I’ve ever seen, but it was nothing crazy.

Just be aware that they don’t see a ton of people who are not Moldovan, Ukrainian, or Russian nationals doing this route so you may have to answer questions about visas that should seem obvious.

Not long (I think – I was still blinking off the effects of my sleeping pills) after crossing the border into Ukraine, we pulled into a small city and instantly a flurry of activity began. People began boarding the train, selling kielbasa, soda, and SIM cards — ah, the trifecta of life’s necessities.

But here’s where the story takes an interesting turn.

I met a mysterious man in all yellow who addressed me in Russian. I repeat: all yellow, shirt, jeans, and all. Upon finding out I was foreign, his demeanor changed into something extremely exuberant. When I answered that I was American, he grew even more animated, and began shuffling through his briefcase through a series of tattily-laminated documents translated into several languages, the text of which read quite a bit like a standard spam e-mail and had a bunch of American-sounding names in it that, of course, meant nothing to me.

He began reading out the text of this spam-like document to me in English at full volume for the entire train to hear, flourishing his hands and shouting “your excellency,” trying to shake my hand with a suspicious forcefulness (which held what looked like a deck of laminated Tarot cards but were probably cards of Orthodox saints).

I was confused and still slightly drugged so I began yelling what I thought was “no, goodbye” in Russian over and over again… before realizing that I was babbling in Bulgarian. Whoops.

My seatmate — a young Russian backpacker about my age — looked on, bemused but looking prepared to intervene if necessary. When the man left, he cracked a smile.