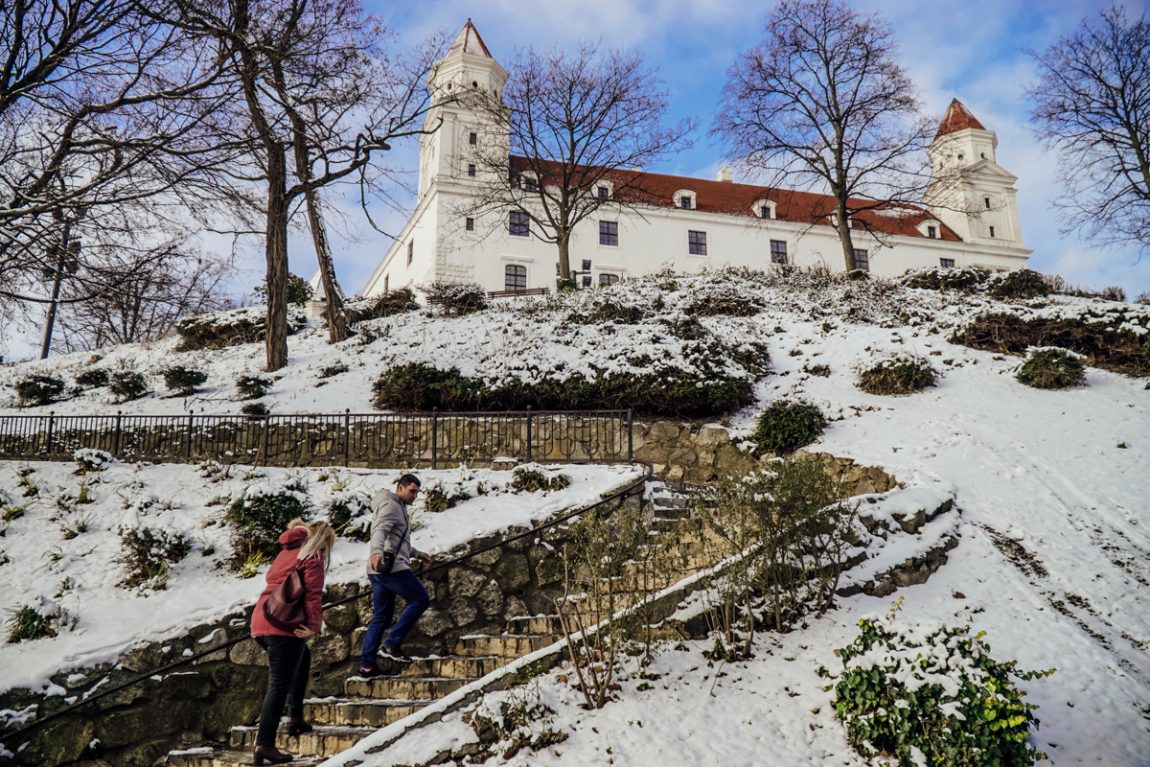 One Day in Bratislava: Itinerary for a Quick Bratislava Trip

If you only have one day in Bratislava, you’re going to want to pack quite a lot in. Many people mistakenly think there’s not a lot to see in Bratislava – myself included until I visited. As a result, it’s given a quick stopover between its bigger, shinier neighbors of Prague and Budapest, or perhaps only given a quick day trip from Vienna.

However, I’m here to make Bratislava’s case. I gave myself two and a half days in the city and when I left, I was kicking myself for not giving myself more time – there’s a lot more to Bratislava than meets the eye.

Still, I’ve noticed that most people who travel to Slovakia only give themselves a day in Bratislava, so I’ve decided to write this quickie Bratislava itinerary so that people can maximize their time and get a bit outside the Old Town and Castle route to see a few other things that make this city unique – all giving yourself just 24 hours in Bratislava.

Your One Day in Bratislava Itinerary

Start your day in Bratislava with breakfast at Mondieu

Mondieu is small Bratislava-based chain with a few restaurants in the city (and it has since expanded to one in Košice and one in Prague). There are a few outposts in Bratislava and at least two locations in the Old Town itself.

The largest is the Laboratoire location (Laurinská 1), which is the most eye-catching and interesting one – especially if you are traveling with kids. If that one is busy (or you prefer a smaller, more Parisian-feeling atmosphere) check out the one on Panská 27 just one block away.

They have a number of delicious breakfast options, both sweet and savory, all for around 6 euros or less per plate. You’ll also find delicious coffees and decadent hot chocolates (I mean, that’s kind of Mondieu’s thing!). The breakfast goes daily until 11:30 on weekdays and 12:30 on weekends, so even if you sleep in, you can get a delicious breakfast to get you ready to make the most of your one day in Bratislava.

There are a number of sights worth seeing in Bratislava’s compact and walkable Old Town.

What each walking tour covers will vary, but a few of the sights you shouldn’t miss include the Primatial Palace, the Main Square, the National Theater, St. Michael’s Tower and St. Martin’s Cathedral.

Since most walking tours stay within the confines of the Old Town, I highly recommend visiting St. Elizabeth if it’s not on your walking tour’s itinerary. This is truly one of the highlights of Bratislava and it was my personal favorite sight in the city. The color of the church is really beautiful and unique and a true gem to photograph.

Unfortunately, the interior of the church is often closed (when I went in winter, they only had operating hours super early in the morning and in the early evening), so you may not get a chance to peer inside. But the exterior is more than worth the extra walk!

Rest your feet in one of Bratislava’s beautiful cafés

Bratislava has a number of amazing cafés – and if I had more time to discover the city, I would have loved to spend more time exploring them.

Since I visited Bratislava in winter I dipped into a café to warm up every few hours, so I have a few recommendations for excellent coffee shops in the city.

My absolute favorite was St. Germain, across from the funky indie cinema house Kino Lumière, mostly because of the interior — I mean, look at that gorgeous wall of books. Other great cafés I noted on my trip through Bratislava were U Kubistu and Urban Space, both which look worthy of a pit stop for some coffee or tea.

Check out some interesting street art

In the area around Kino Lumière you’ll find some interesting street art that is definitely worth stopping to look around.

If you circle from the area around Dunajská and Rajská to Kamenné Square you’ll pass by a lot of my favorites, including the adorable fox pictured below. Don’t forget to pop into the parking lot area near the square where there is some great street art lurking!

Have an incredible Slovakian lunch at the pivovar

Who knew Slovakian wine was so damn tasty? I shouldn’t have been surprised given how much I love the food in Prague, but I was so impressed by the deliciousness of Slovakian food (and how different it is from Czech food).

Bratislavský Meštiansky Pivovar is one of the oldest restaurants in Bratislava and has been serving up tasty food since 1752. I went to the original on Drevená street, but there is also another branch on Dunajská.

I enjoyed a traditional meal of bryndzové pirohi, Slovak-style potato pierogi with a creamy sheep’s cheese, crunchy fried shallot, and crispy bits of smoky pork all topped with a sprinkle of chives and oh my god. It felt like a hug from the inside out and I could probably eat it every day for the rest of my time. A similar but slightly more traditional version would be the same but made with halušky which is a potato-based dumpling sort of similar to an Austrian spätzel in terms of shape and texture.

Walk up to the Castle

Once you’ve gotten your fill of hearty Slovak cuisine, it’s time to wander up to the beautiful Bratislava Castle which is about a 20-minute schlep from the Old Town. You’ll pass plenty of cute wine bars and shops along the way, so it’s a nice walk.

You can wander around the exterior of the castle and look at views of the lovely Danube for free, which is pretty awesome. If you want to go inside the castle, you can. It has recently been renovated and is home to the Museum of History which costs 7€ to enter. I didn’t check out the inside as I was feeling a bit out-museumed after a few days in Prague, but I loved the castle nonetheless, especially since it was all coated in snow when I visited!

One of the quirkier landmarks of Bratislava, the UFO bridge (Most SNP) dates back to 1967, when Bratislava was firmly part of Communist Czechoslovakia and futuristic TV towers and UFO-looking things were all the rage.

It’s a pretty cool feat of architecture as it’s the world’s longest bridge to have just one pylon and cable-stayed plane, which is what gives it its unique shape.

To get to the UFO bridge safely, be sure to take the pedestrian walkway underneath as the top level is just for cars. There’s an observation deck slash restaurant inside the “UFO” at about 100 meters above ground. You can visit for about 7€, but the fee is waived if you eat or drink at the restaurant.

Central and Eastern Europe generally haven’t been known for their diversity but the scene is quickly changing. I lived in Prague almost a decade ago and finding anything that wasn’t Czech food or pizza was a struggle, and Indian food felt like pure luxury. Now, Prague is a multicultural mecca and so is Bratislava.

I wasn’t surprised to find that Bratislava has quite a few excellent Vietnamese restaurants, as due to an agreement between communist Vietnam and then-Czechoslovakia, there are a lot of Vietnamese living in the Czech Republic and Slovakia.

I’m a huge fan of pho and it’s hard for me to find living in the Balkans, so I ate at PAPAYA on Námestie 1. mája 15 and it was delicious – I definitely recommend their pho and summer rolls, it’s exactly what I miss from my travels in Vietnam.

Other ethnic cuisines which came recommended to me but I didn’t have time to try are Thali Dunajská for vegetarian-friendly Indian, Made With Laf for vegan cuisine, and Green Buddha for excellent Thai.

Of course, if you want to try more Slovakian food, you’re in the right place. Modrá Hviezda and Koliba Kamzík both come highly recommended!

Where to Stay in Bratislava

If you’re just visiting Bratislava for a day trip, you won’t need to stay overnight, but just in case you are planning a night in Bratislava, here are my recommendations for hotels and hostels.

This affordable hostel in the heart of Bratislava’s city center, close to the Old Town and the castle, has a lot going for it! Hostel Folks is the best-rated hostel in Bratislava for good reason. The dorm rooms have tons of space – so much so that they even have beanbag lounging areas in the rooms – and a clean, uncluttered aesthetic. There are private doubles, triples, and quads, but there are also dorms (mixed and female) for solo travelers.

There’s a large common area to socialize in, complete with a flatscreen TV, a PS3 and plenty of games, as well as a computer with a printer you can use (great if you need to print a boarding pass or train ticket last minute). The hostel also boasts a clean and well-stocked kitchen, lockers, and free coffee and tea. Most rooms have A/C and the bathrooms are ultra-clean and well-kept.

For gorgeous views over the Danube River and a prime location just 500 meters from Bratislava Castle, River View Residence is my top pick in Bratislava if you’re visiting on a middle-of-the-road budget. The rooms are enormous and spacious with plenty of room to spread out without feeling cramped. But the best part is definitely the floor-to-ceiling windows that give you sweeping Danube views! Despite feeling like a bit of an oasis away from town, the city center is just 15 minutes’ walk away, so you’re never far from a good meal.

There are a variety of room types available, including suites if you want a separate living area, and family rooms that can accommodate up to 5. Some rooms have a terrace, others have a bathtub, so check out the different room types and pick the one that’s best for you.

There are a number of excellent luxury hotels in Bratislava but I always tend to opt for a boutique option over a more standard chain hotel as I find they have far more personality and are just a lot more memorable. LOFT Premium & Wilson Palace is a fantastic find in Bratislava, with just 32 rooms in the LOFT hotel and another 10 rooms/suites in Wilson Palace, a real historical palace in Bratislava. I mean, how often can you say you slept in a European palace?

The rooms are huge, furnished elegantly as would befit a palace, with modern bathrooms including soaking tubs (swoon) and fancy espresso machines (double swoon).

Other perks include the great breakfast spread, the free (!) minibar which is restocked daily, as well on the on-site brewery FABRIKA which produces its own beer (wait, a brewery in a palace? Can I just move in already?) 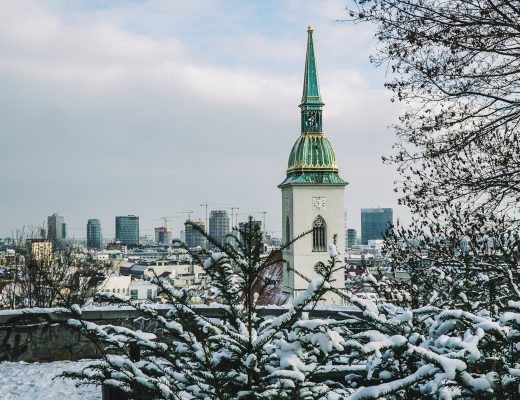 Bratislava in Winter: 13 Magical Things to Do in Bratislava for Christmas

December 20, 2018
Previous Post 10 Epic Day Trips from Geneva (+ How to Get Everywhere)
Next Post 5 Delightful Reasons to Visit Lisbon in March