Since I started down the rabbit hole of travel blogging, I’ve encountered so many incredible, inspiring bloggers. Due to that, I’ve decided to start a monthly interview feature featuring travelers who go against the grain and do kickass stuff without fear or hesitation – especially solo and/or female travelers.

One such blogger who has inspired me is Danie of Like Riding a Bicycle. This awesome girl writes about traveling and living with depression in a raw, unfiltered way on her blog. Her honesty is a refreshing antidote to the lalalala-plug-your-ears-and-ignore-the-bad-shit that travel blogging can at times devolve into. I first met her when she was putting out a call for the Enabled Mindset series about travelers who deal with physical/mental disabilities and illnesses. She interviewed me about traveling with anxiety, and we’ve been in touch since.

After hitchhiking around Albania with some new travel buddies, I thought of Danie and how she’s been hitchhiking the world solo for over 3 years. Despite trying to think of myself as a fearless, do-anything solo traveler, I somehow balk at the idea of hitchhiking solo in a woman’s body. So I decided it’d be great to feature Danie’s voice, to empower other female travelers wondering if it’s okay for them to do this on their own. 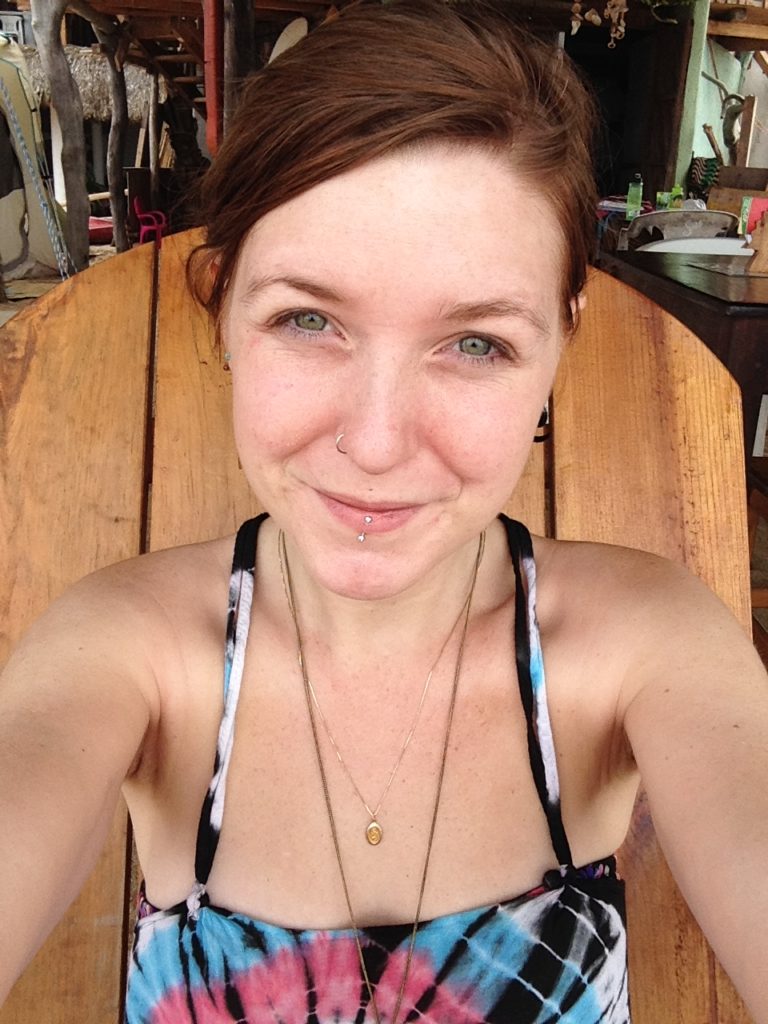 Meet Danie, the awesome traveler behind Like Riding a Bicycle

What was your very first solo hitchhiking experience?

The first time I hitchhiked solo was in the outback of Australia; a kind couple in an RV picked me up after having a chat at our campground. They were only supposed to drive me to the highway, but being all motherly, decided to bring me to the next gas station down the road – 200 km away. It only took me two rides to get where I was going, but the next one was one of my all time favourites; it was actually a biker gang called the Rebels (basically like the Hells Angels of Australia), and they were great fun. I have a weird thing where I tend to get along well with bikers, plus they aren’t all bad like some people like to think.

What inspired you to start hitchhiking?

Freedom. I just wanted the freedom to roam wherever I wanted, without having to have money to do so. Of course I love meeting new people and seeing places I never would have otherwise, but it’s really the freedom that inspired me in the first place. 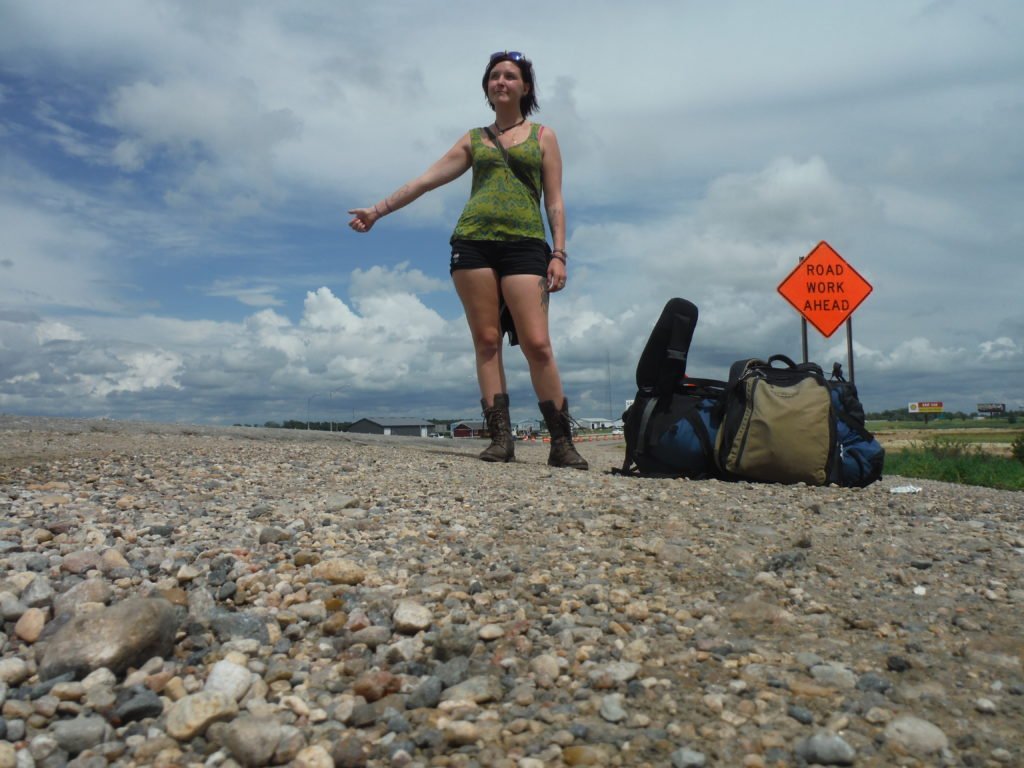 What was your most interesting hitchhiking experience?

One time I was stuck on the side of the motorway in Scotland, with nowhere better to move to. Suddenly the police pull up, and I was sure I was going to get into trouble. But no, they recognized I was in a bad spot, and gave me a lift a few miles up the road. One of the officers asked if I’d ever been picked up by the police before, and when I replied that I hadn’t, he said, “It’s because we care.” Gotta love Scotland!

How is hitchhiking solo is different for women?

Honestly, I hate differentiating between solo travel for females versus males. I mean, I probably get picked up faster, and get hit on more, but I don’t think anything more than that is terribly different to be perfectly honest. 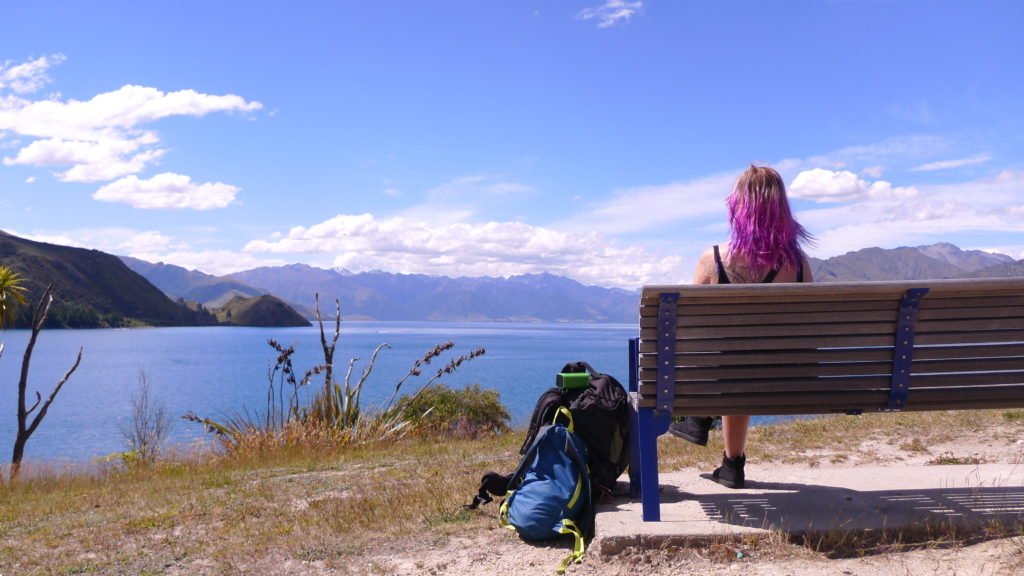 Not many women hitchhike solo – it seems to be much more common with men. Have you had any surprised reactions from people who have picked you up?

Oh, definitely! I actually especially get surprised reactions when I hitchhike from gas stations, and approach women asking them for a lift. They oftentimes get concerned for me, winding up giving me a lift although they’d never pick up a guy in a million years. Really it’s more women that get surprised than men by seeing a chick hitchhiking alone.

What is the longest you’ve ever had to wait between rides? How do you keep yourself sane while waiting?

The longest I ever waited – shockingly – was only three hours (unless you count the nights I gave up and set up camp to start again the next morning!) When I’m in remote areas I honestly start doing stupid shit – I sing loudly and obnoxiously to myself, do a little dance, whatever to keep myself entertained. I also have a rule that I’m not allowed to look at the time while hitchhiking, because I’d just go insane knowing how long I’d been waiting if it was taking forever.

How do you deal with the bad days (bad weather, hard to get a ride, bad mood, etc.)?

Well, the bad weather days I aim to just hitchhike from gas station to gas station so I always have shelter. While some gas stations will kick you out, most are really kind to me. Some days I’ve just had really bad rides – men who expect something from me and the like, and of course I just get out of the car when it happens, but it does put a damper on the day. I guess I just stick my thumb back out, and hope the next ride cheers me up. And they almost always do. 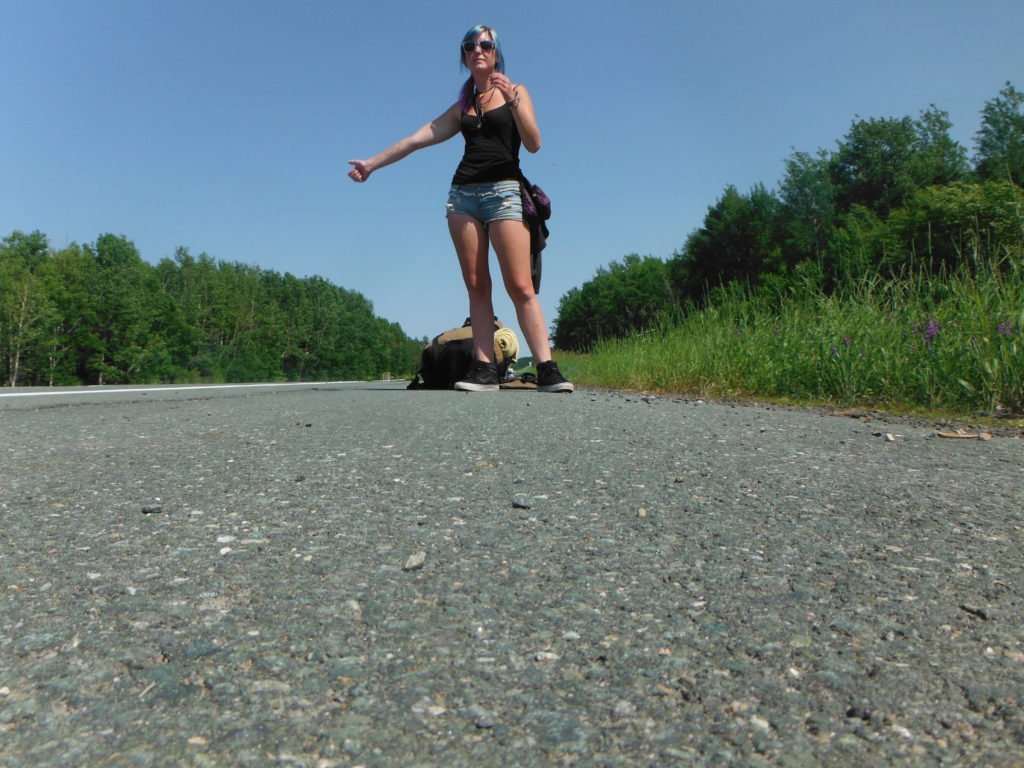 Have you ever had an uncomfortable experience while hitchhiking?  How did you get out of it?

The worst experience I had was in England, when I got in a car from an on ramp to the highway. Within 10 seconds of driving the guy asked me, “So, what do I get for this ride?” to which I replied, “Uh, good karma.” Then he swore and said he wasn’t giving me a free ride, so I told him to let me off at the next turn off – about a three minute drive away. Instead, because he was awful, he pulled over at the side of the fast motorway and kicked me out. I mean, at least I got out of the car, but while I’ve been hit on before, I’ve never had someone be so utterly awful as to leave me somewhere that’s actually dangerous to hitchhike from as the cars are ripping by so fast.

What places have been the best and the worst for hitchhiking?

Scotland and New Zealand were definitely the best; in Scotland I never waited more than 10 minutes for a ride. In New Zealand hitchhiking is very socially acceptable, and loads of travelers do it. The worst was the States; people tend to see you at a gas station, for example, and they’ll be really nice – giving you food or some money… but they won’t give you a ride, because they’re terrified of hitchhikers. It’s the whole stranger danger thing. The nice thing was that when I finally would get a ride in the States, it was usually someone really cool, oftentimes who has hitchhiked.

What would you say to other women out there who want to hitchhike solo?

Go for it! Always keep your wits about you, and get out of any car you feel uncomfortable in. It’s always better to wait, even if it’s late and it means setting up camp and waiting for the next day, than to be in a car you don’t feel okay in. In this day in age women can do anything, so if you want the freedom to hitch on your own, don’t let anyone hold you back.

Before you embark on any hitchhiking adventure, be sure you read Danie’s hitchhiking tips! It’s chock full of a lot of important information on picking the best spot, safety, and other important need-to-know stuff. 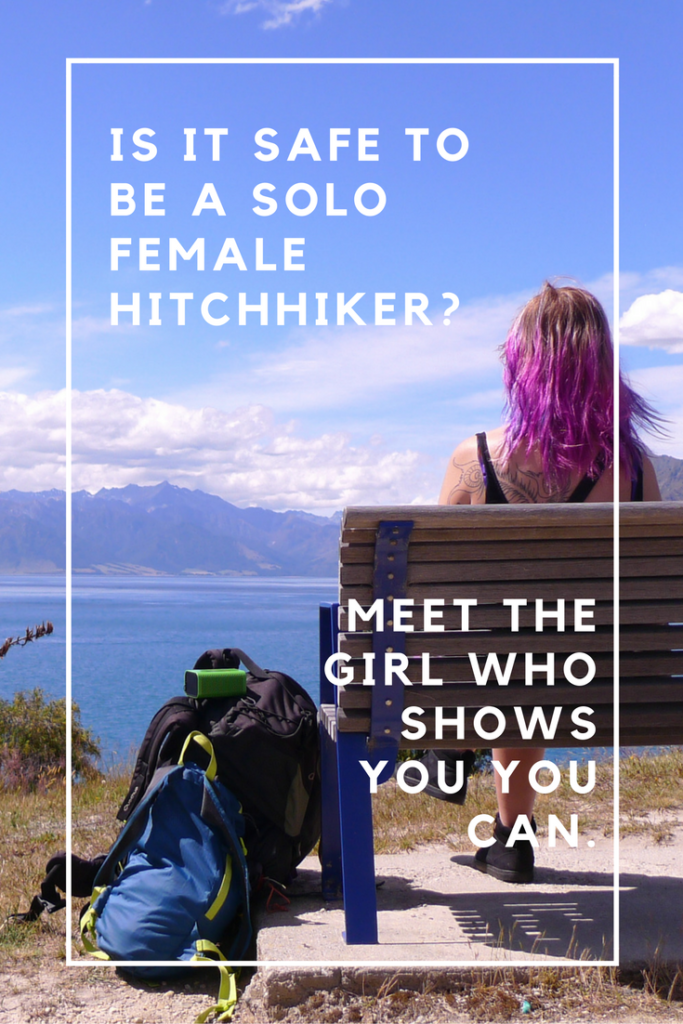 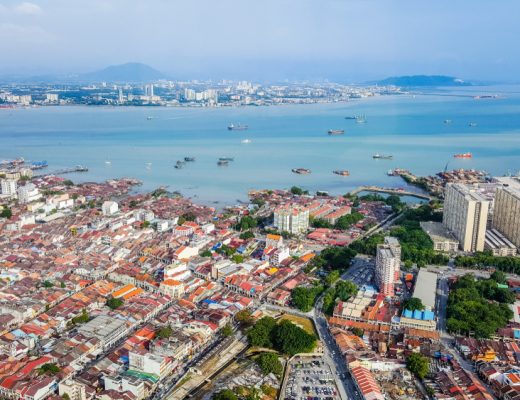 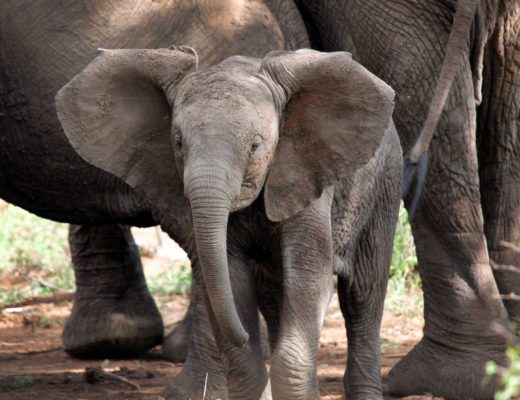 10 Lively Things to Do in Livingstone, Zambia 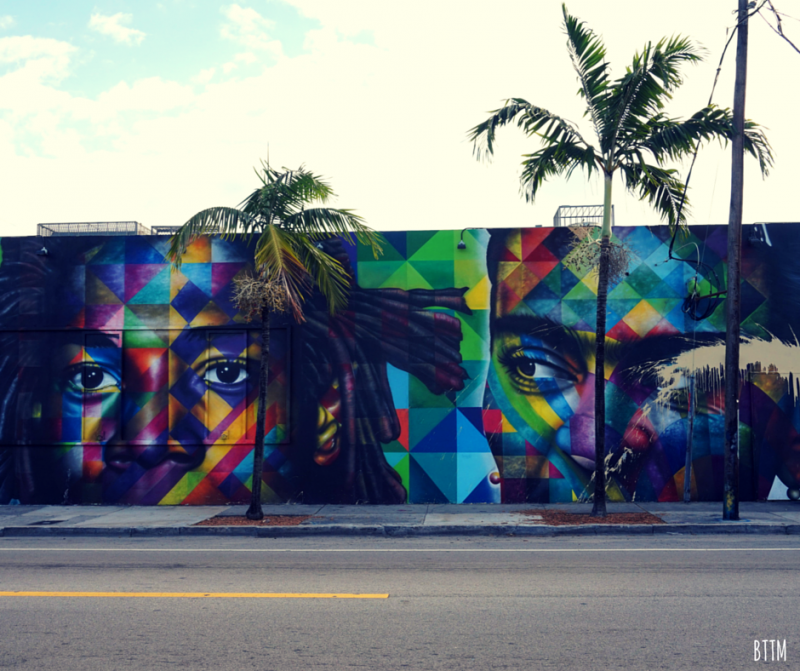 October 1, 2016
Previous Post 32 of the Quirkiest, Most Colorful Cities in the World
Next Post How I Work From Anywhere and Travel Indefinitely Using Upwork