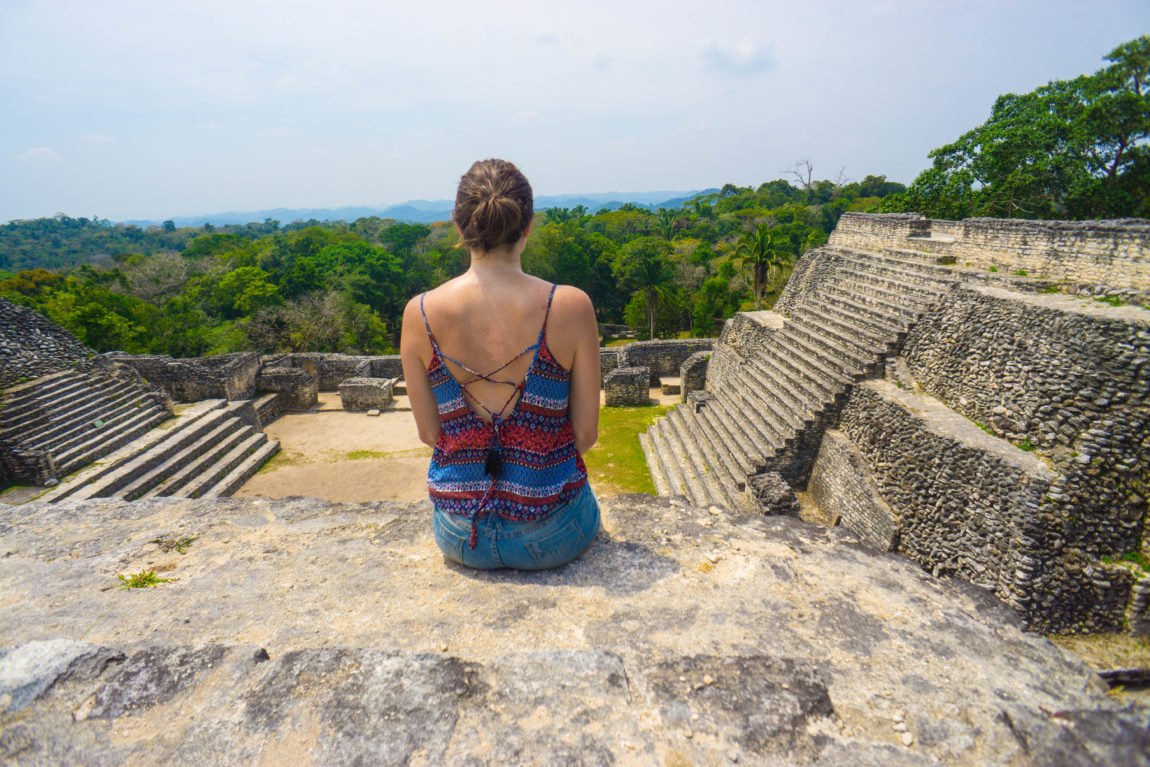 Tikal and Chichen Itza get all the glory when it comes to ruins. Guatemala and Mexico are just fame hogs like that. But deep in Belize’s jungle, about two hours out from the nearest large town, you’ll find pyramids just as impressive — and far less crowded.

Because of the off the beaten path location of the ruins, you can’t get to Caracol by public transport. You’ll have to take a tour or rent a car — and since at least an hour is basically off-roading, unless you have a rugged car or balls of steel, you’ll probably want to opt for the tour. 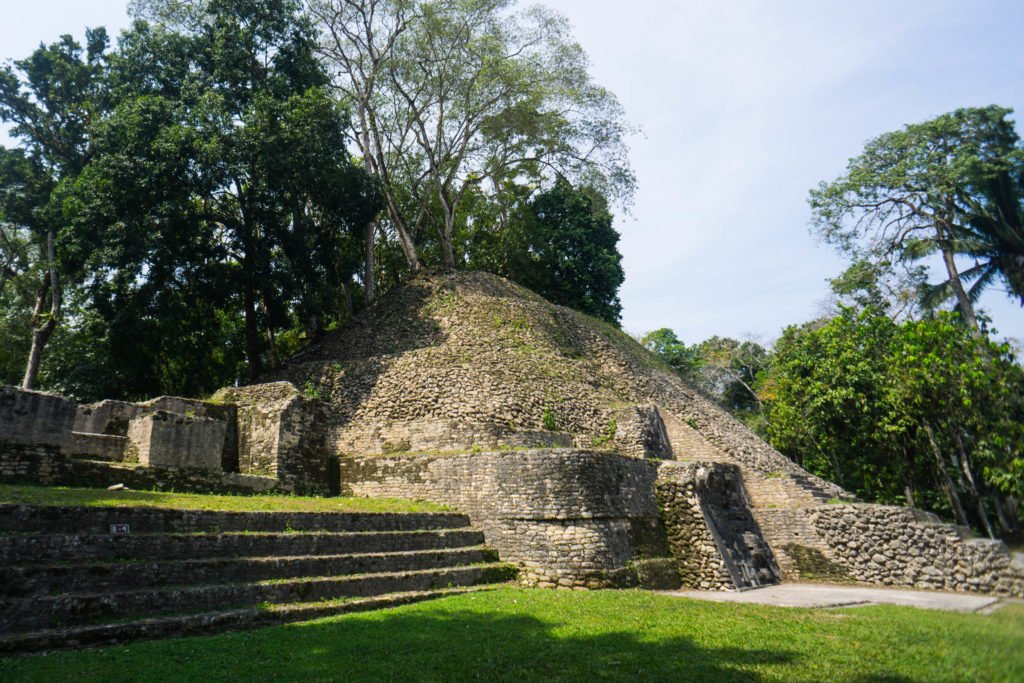 After loving my ATM cave tour with MayaWalk, I decided to go with their company again to see the ruins of Caracol. And good thing too, as it ended up being yet another amazing day in Belize, a country that’s quickly becoming one of my favorites.

We started the day with yet another cave — although I must admit that after ATM, no cave will ever come close. It was pretty cool though – just look at how massive it is! 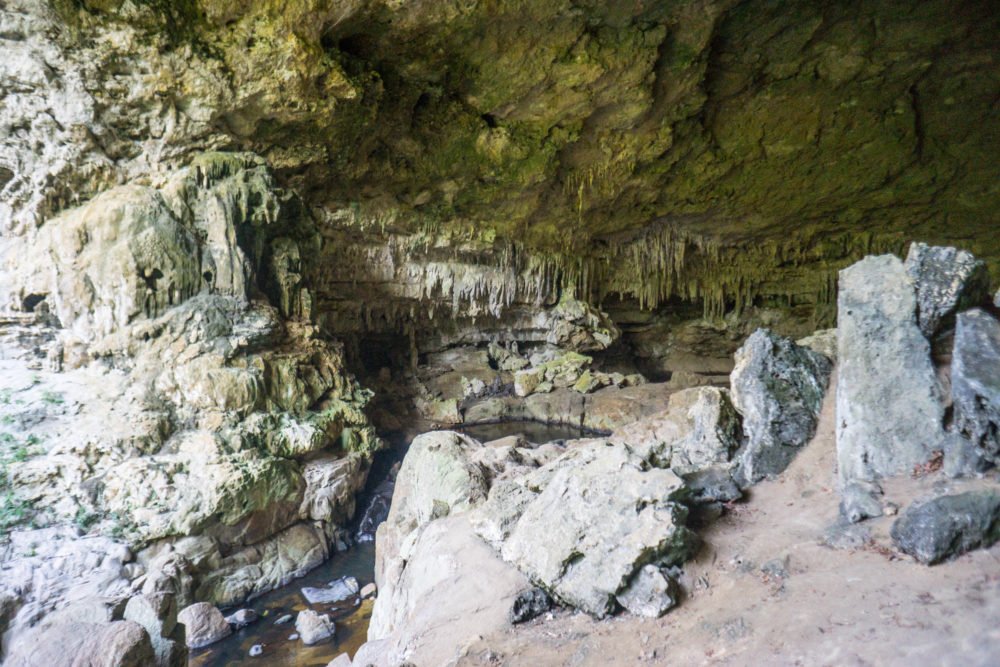 The coolest thing about this cave, though, is that there is an actual beach inside the cave – yes, with sand and everything!

How many countries can say that even their caves have beaches? Belize, you freaking stunner. 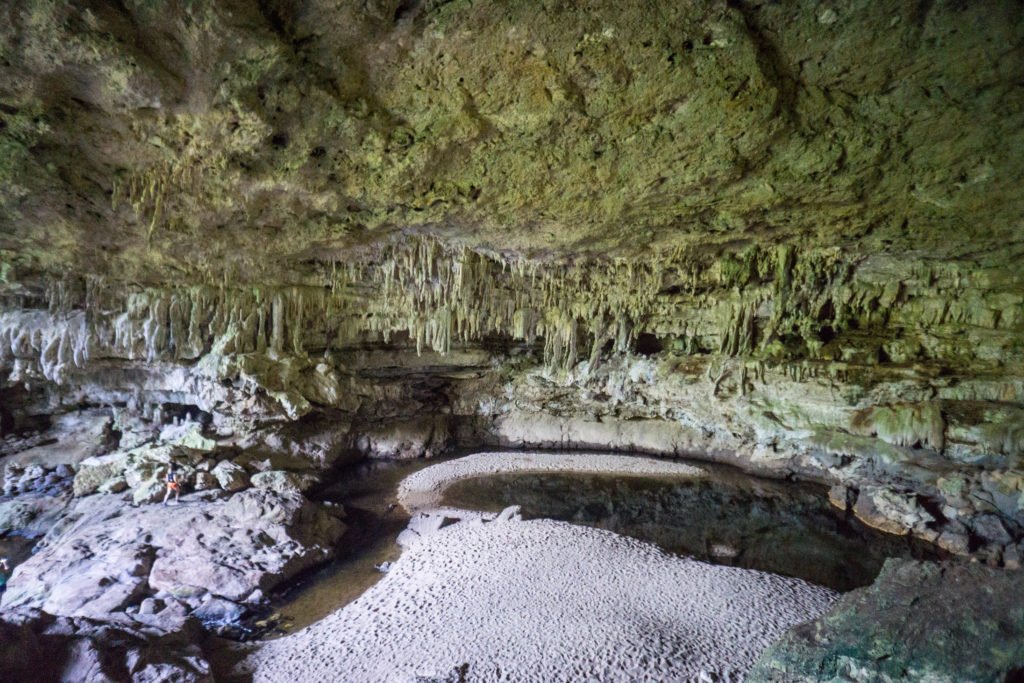 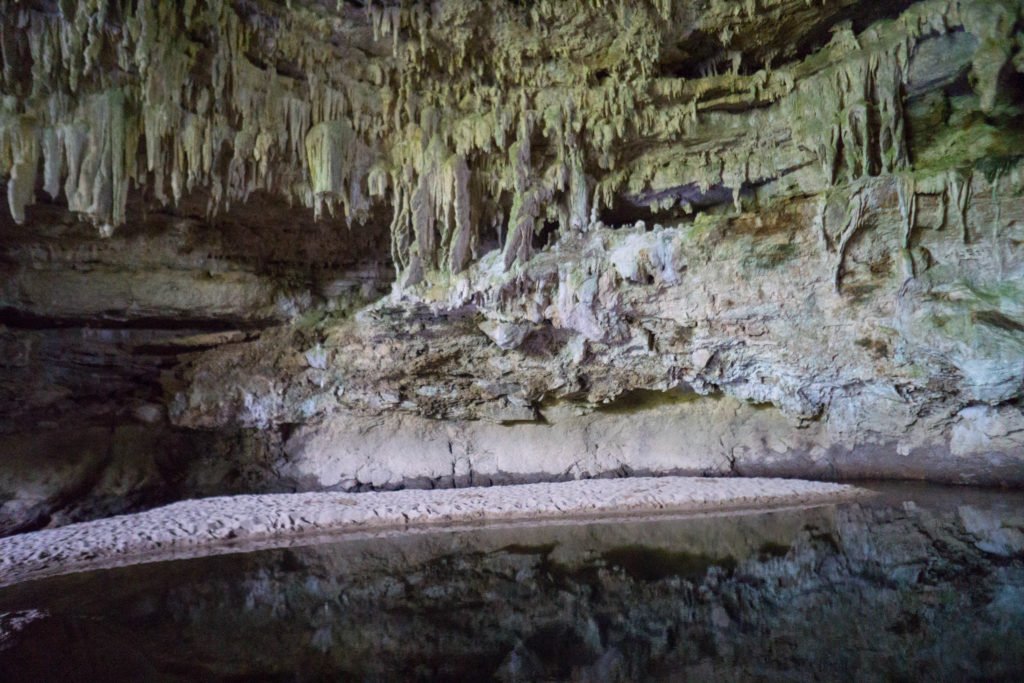 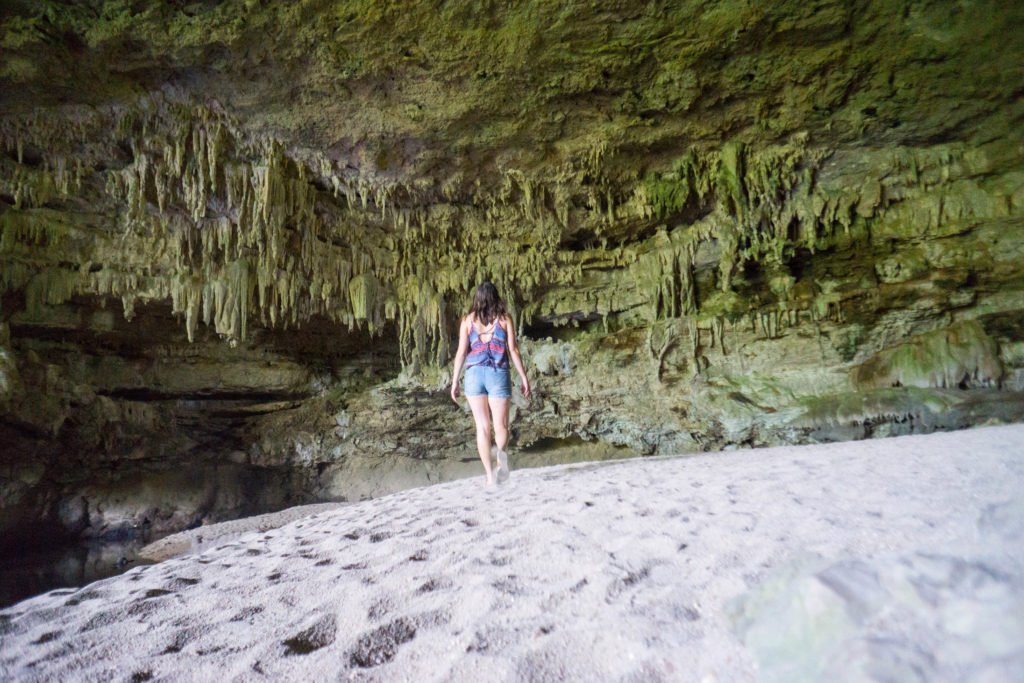 After frolicking on this cave-beach, I allowed myself to be corralled back into the van to see the ruins. After all – they were what I came to see.

Another hour of bumpy roads later, we arrived at the site of the Caracol ruins, one of the coolest things to see in Belize. Caracol is the highest and largest Mayan structure in all of Belize, and its position on the border of modern-day Guatemala means that from the top you can see two countries at once, something that this geography nerd always loves (my record is 7 countries at once from a mountaintop in Montenegro!). 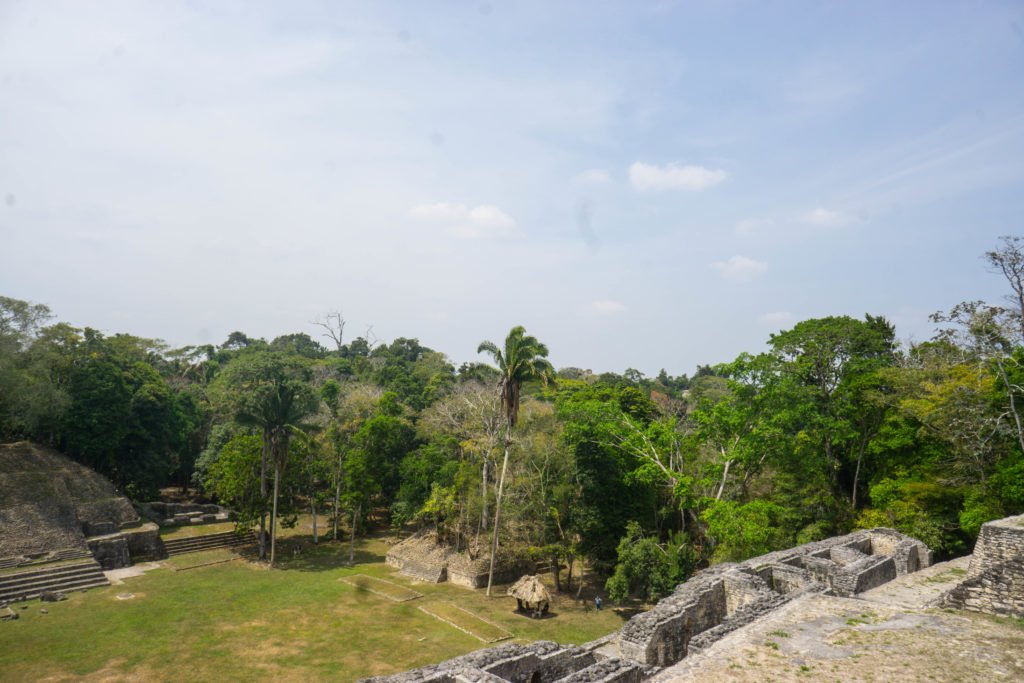 Another amazing thing? Just look at how empty this place is. This completely unedited photo literally has one other human being in it. One. Just try getting that lucky at Tikal or Chichen Itza… you’ll have to do some early morning trespassing, a lot of waiting, or some Photoshop wizardry to get a picture this clear of people.

The ruins of Caracol span about 15 square miles, though they’ve definitely faded from its glory days – both literally and figuratively, as the stone structures were once painted vibrant colors. In fact, the main pyramid used to be painted red. Just imagine a red pyramid matched up against a lush green backdrop — now that would have been a sight to take in.

This wasn’t too bad, either. 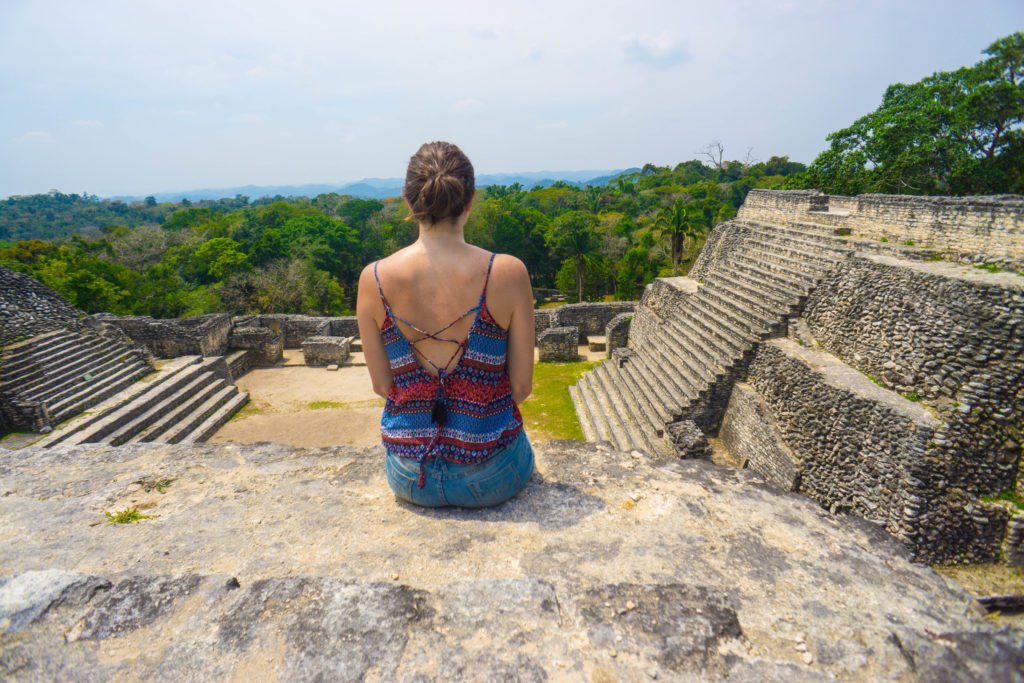 The site of Caracol was first settled perhaps even 3,000 years ago, though the structures are mostly from the period between 600 and 900 AD. At its peak, over 120,000 Mayans lived in this city.

Despite its smaller size than nearby Tikal (in modern day Guatemala), the Mayans who occupied Caracol bested them in war and marked the occasion with a celebratory obelisk which, thanks to colonialism, is now housed at the British Museum. Don’t worry, though, they were kind enough to leave behind a plaster replica! 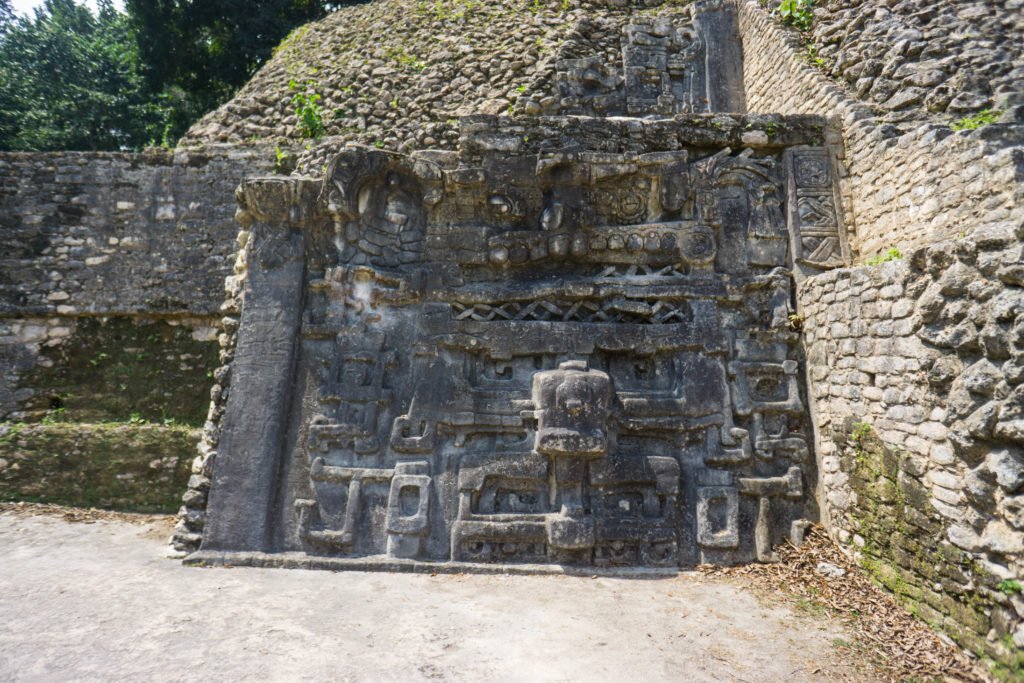 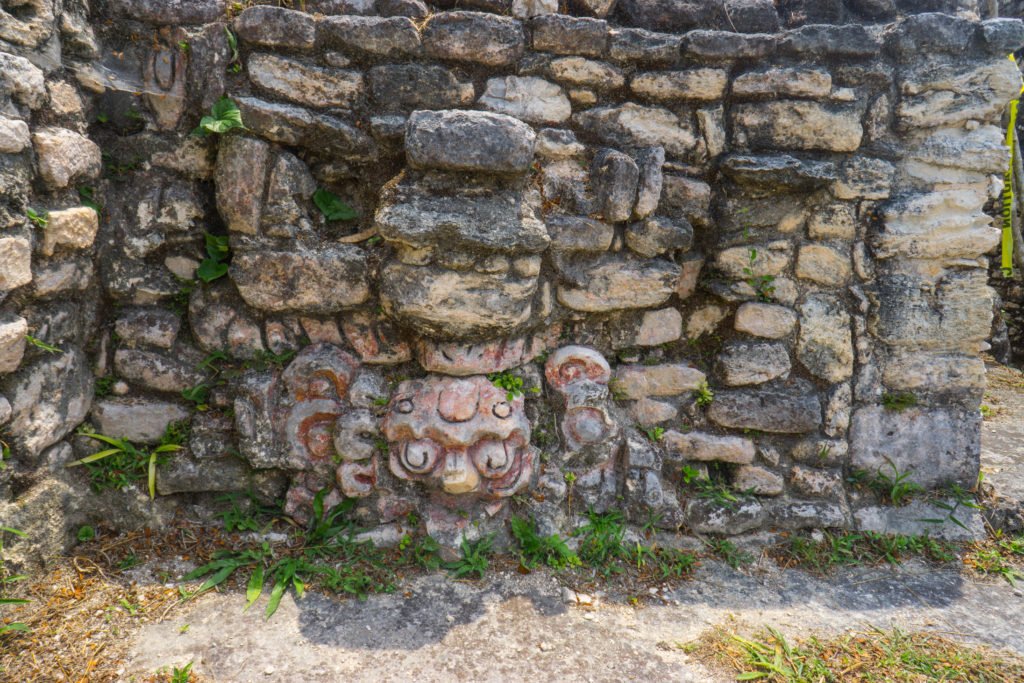 The sun was just starting to beat down with its typical pre-noon intensity, the kind that wouldn’t let up until well after 4 that afternoon. We walked through a bit of shade, our guide pointing out a trio howler monkeys napping in the trees along the way.

Luckily, they were too tuckered out by the heat to make their typical demonic howls. 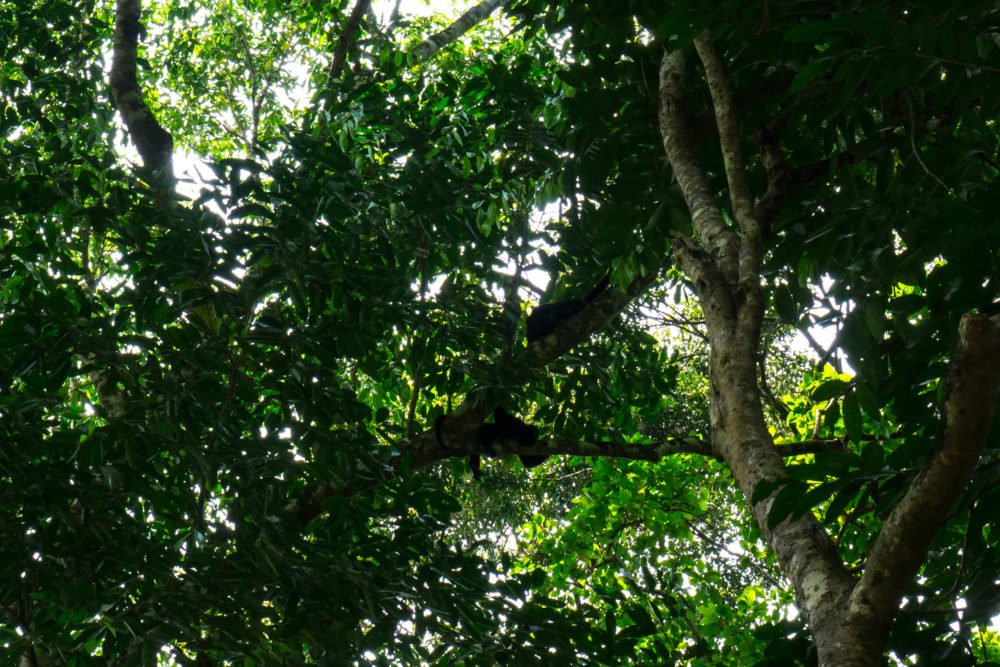 Our guide was super knowledgeable about all of Caracol’s wildlife – in fact, it turned into a bit of a birding expedition of sorts. My personal favorite? The Montezuma oropendola, aka the most badass bird nature ever created.

Basically, the female birds make the male birds build these elaborate hanging basket-type nests for her and her future eggs. If they’re not up to par, she’ll destroy them and refuse to mate with them. Slay, lady, slay. We should all be so fierce. 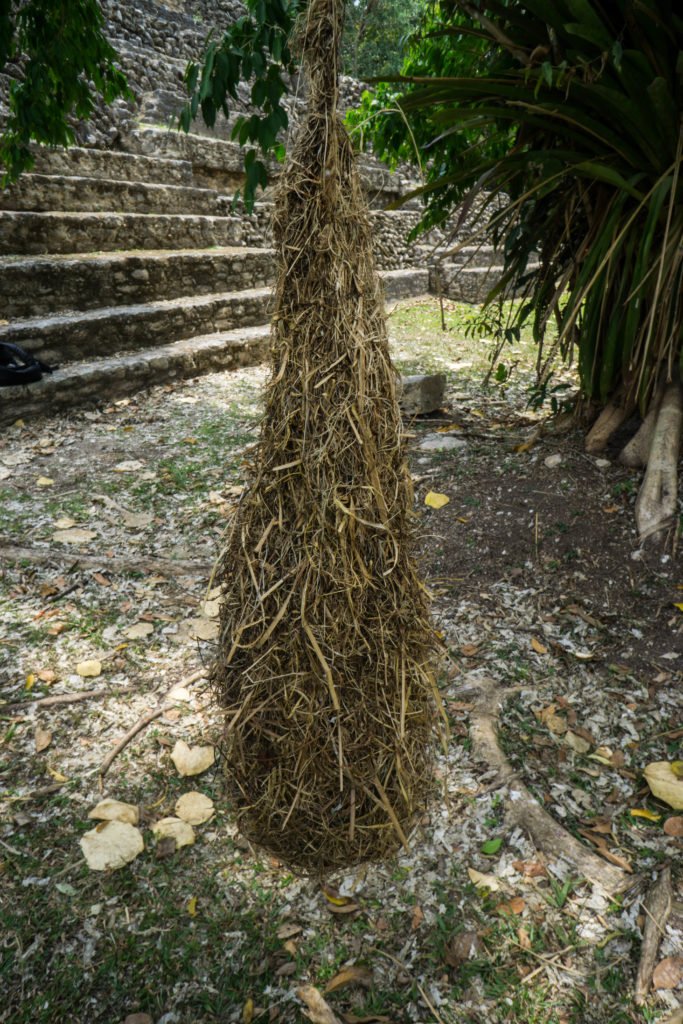 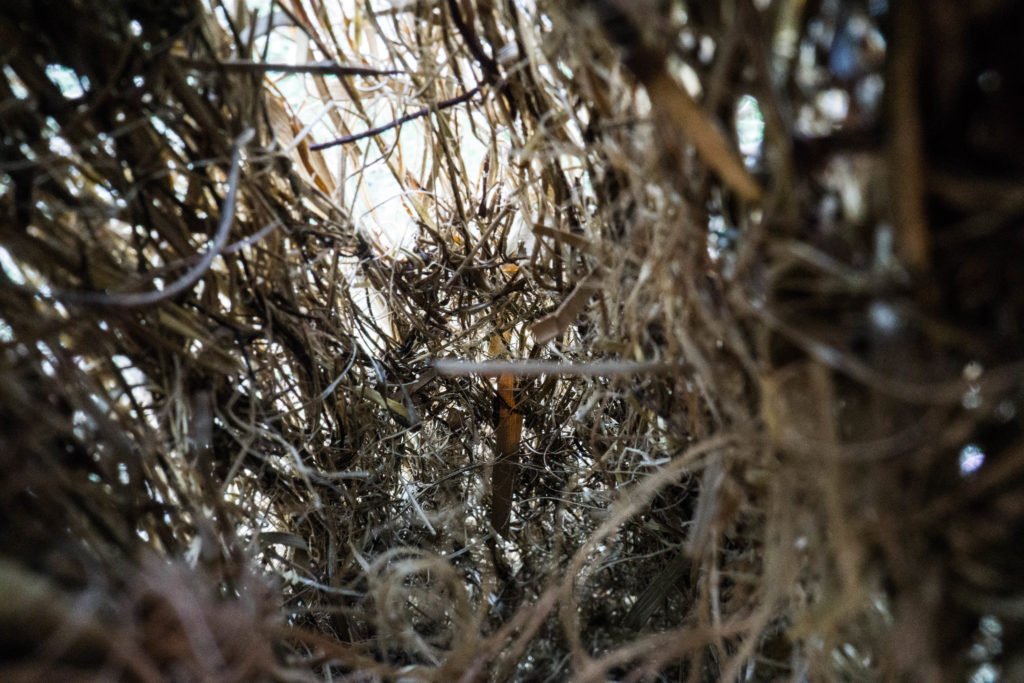 After touring the ruins and getting some serious life lessons from some birds, we ate our packed lunches, broke into the rum punch because duh, it’s Belize, and then made our way to the Rio On Pools – a set of natural pools located just outside of Caracol.

And because our guide was a class act, he offered to give us some rum punch to go.

Never one to be rude, I accepted. 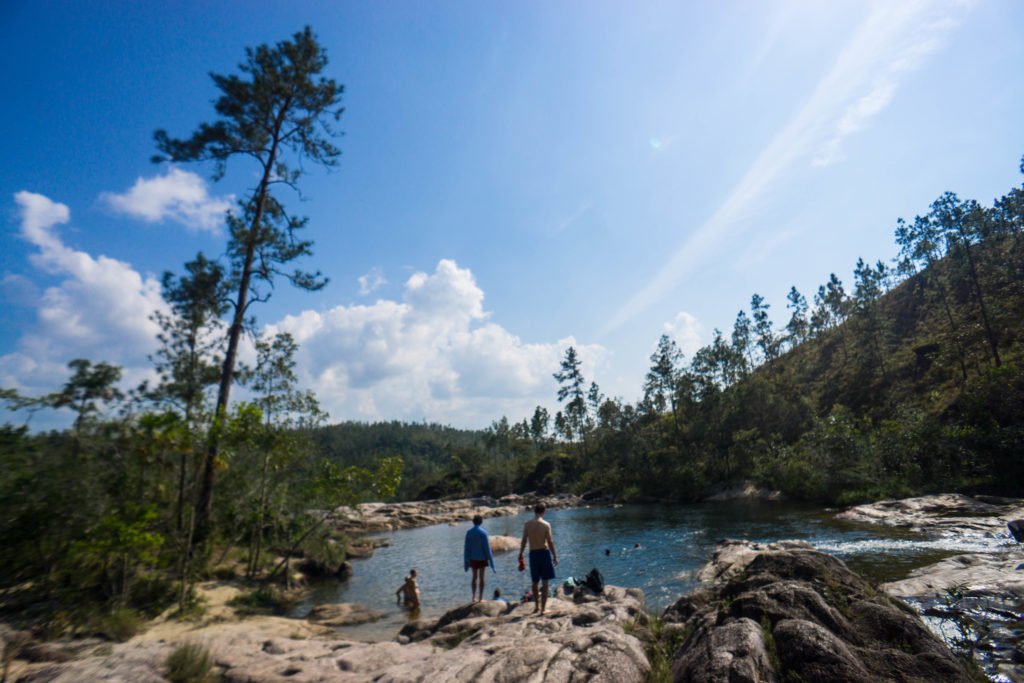 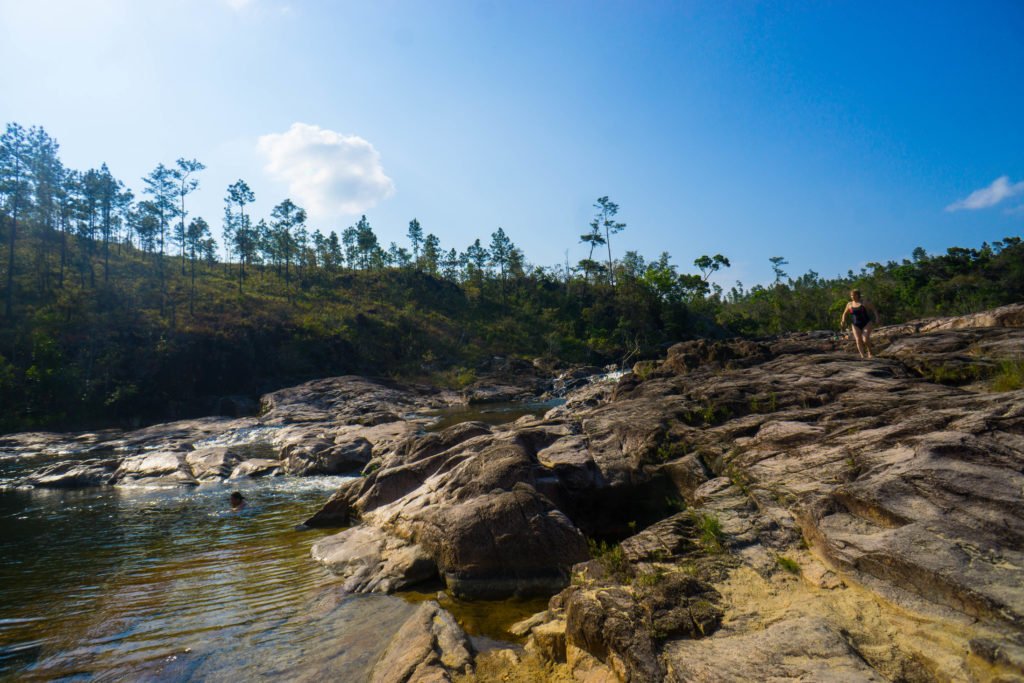 My clumsiness kept me from taking the best photos, as the slipperiness of the rocks all but ensured I’d send my beloved Sony A6000 plummeting to the bottom of a pool.

But in addition to a beautiful swimming hole with a view of forest and jungle, there was a natural whirlpool and waterslide of sorts, plus two waterfalls where you could make nature give you the world’s best shoulder massage.

Don’t just take my word for it, though. Go and see it for yourself — you’ll be one of the only ones, I swear.

7 Things You Must Pack for Belize

I’ve written an entire Belize packing list but if you just want the essentials, here’s what I think you shouldn’t forget!

Note: I was provided with a complimentary tour from Maya Walk. All opinions are entirely my own. 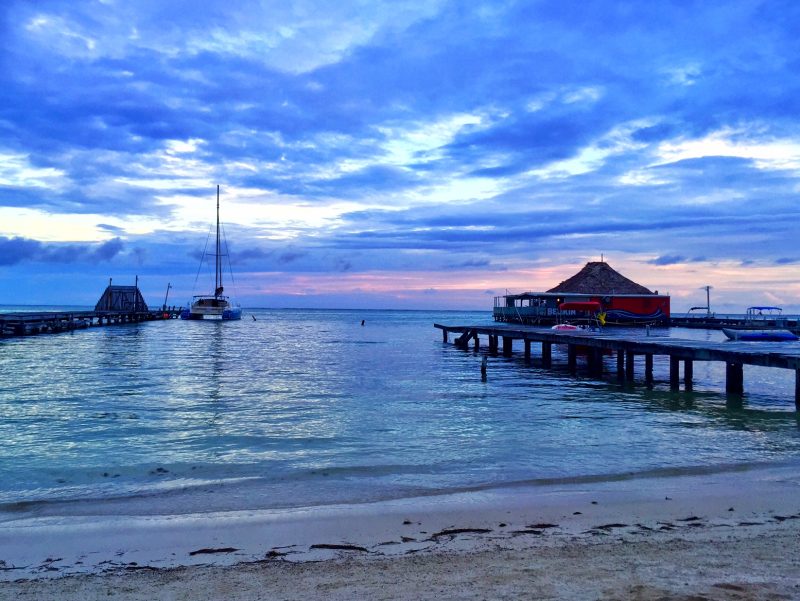 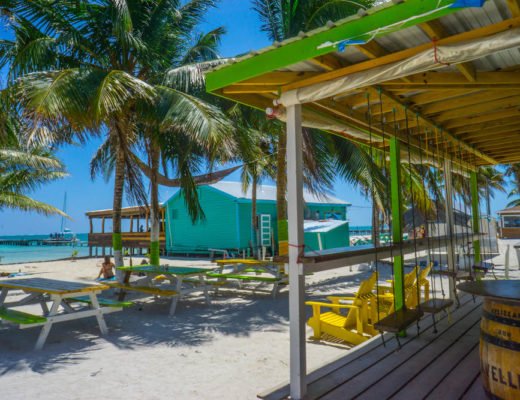 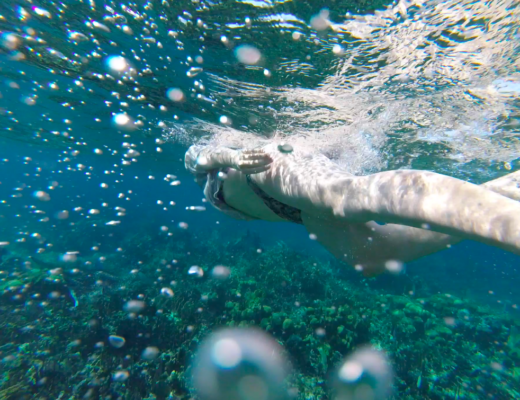 April 11, 2017
Previous Post Beyond Belgrade: The Colorful, Historic City of Novi Sad
Next Post Bacalar Lagoon, the Maldives of Mexico