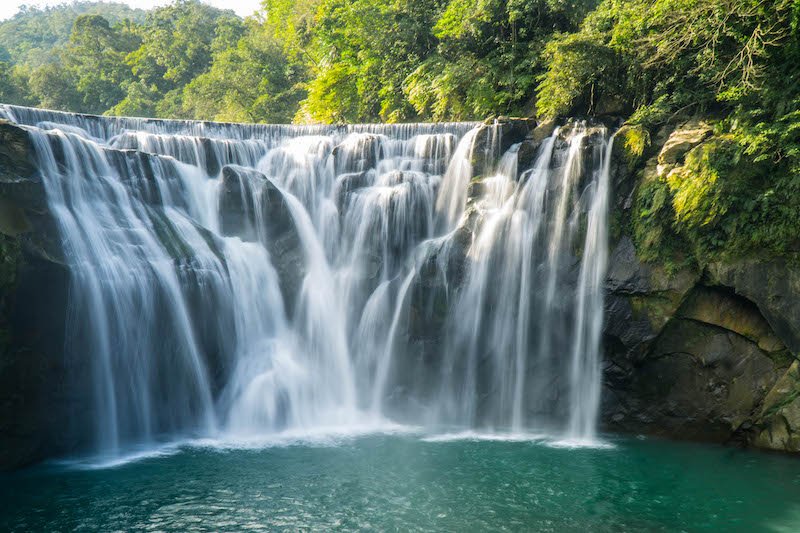 Shifen Waterfall: The Most Beautiful Day Trip from Taipei

It’s hard to get sick of Taipei. The city is electric, full of activity and excitement. Whether you’re exploring the urban architecture or snacking at one of the many night markets in Taipei, it’s nearly impossible to get bored.

However, you can get a bit tired of the constant flow of traffic and go-go-go atmosphere of city life anywhere, and Taipei is no exception. Luckily, one of the most amazing things about Taipei is just how accessible this city of nearly 3 million people is to such green, beautiful nature.

Even better, Taiwan’s excellent transit system makes it pretty easy to get just about everywhere you’d like to go.

I was initially a bit nervous to try to traverse Taiwan’s public transportation given that I neither speak nor read Chinese: turns out I shouldn’t have worried at all.

The public transportation here has excellent signage with plenty of English language directions. And in my few moments of confusion, Taiwanese locals have always proven to be extremely friendly and ready to help. However, if you do want to take a tour, you can purchase a guided tour of Shifen, Jiufen, and Pingxi here with Get Your Guide. Or, if you’d rather self-guide but have point to point transportation in between, there is this convenient Taipei-Shifen-Jiufen-Taipei shuttle bus that is inexpensive at around ~$20.

Getting from Taipei to Shifen

There’s a reason why Shifen is the most popular day trip from Taipei! It’s quite easy to get to Shifen from Taipei. First, you’ll want to to take the MRT to Taipei Main Station. From there, you can board any northbound train except a Keelung-bound train to Ruifang (the express trains are called Tzechiang). A ticket cost 78 Taiwanese dollars, or about $2.50 USD.

This is the only place I found the signage a bit confusing, as it wasn’t immediately apparent which trains were going to stop at Ruifang. You might want to ask a local to be sure you’re getting on the right train if you don’t read Chinese.

At Ruifang, transfer to the Pingxi line and ride that all the way to the end. Best is to buy a day pass for the separate Pingxi line, which costs 52 Taiwanese ($1.76 USD).

The Pingxi line can be quite crowded and you may have to stand – but try to look out the window as you go because you’ll cross some really beautiful scenery!

Shifen Old Street reminds me a bit of that famous “Train Street” that goes right through a market in the center of Hanoi. As you pull into town, the bell will ding manically, telling the people standing in the train tracks taking selfies and sending lanterns into the sky to get off the rails.

This train ritual is a well-oiled machine, though (pun fully intended — I can’t help myself), and plenty of conductors are present to direct the selfie-stick wielding crowds off the tracks in a timely and safe manner.

You’ll cross the tracks and immediately, you’re in the heart of Shifen’s Old Street, where plenty of delicious and tempting Taiwanese street snacks await you. Some personal favorites are Taiwanese fried chicken and xiao long bao (pork soup dumplings — look for steam rising from bamboo baskets!).

The quintessential thing to do in Shifen is light a lantern for good luck and send it off into the sky.

Ever the narcissists, we chose attraction and popularity (in reality, Janet just wanted a pink one!).

Jury’s still out on if it’s working yet.

Jokes aside, while touristy, I’ll admit it was a fun experience to write our wishes (and our blog names, because again, #narcissist) on the lantern, light it up, and watch it go careening into the sky to disappear somewhere over Taiwan’s green mountains.

Shifen is the site of the mega Lantern Festival held in Taiwan each year in February, so it was nice to be able to be a part of this tradition in a smaller way.

Getting from Shifen Old Street to Shifen Waterfall

Once you’ve snacked to your heart’s content and sent your wishes skyward, it’s time to visit the stunning Shifen Waterfall. We were able to rent an electric bike for an hour for 200 Taiwanese (about $6 USD), which carried two people — barely. At some points, I thought I was going to have to get off and let Janet scoot her way up the hill, as all the xiao long bao I’ve consumed over the past few days certainly wasn’t helping our center of gravity.

To be honest, though, the electric bike ride was so short that I don’t even know if it’s worth it unless you’re really in a rush. I think it would have only been like 30 minutes walking to the parking lot (even though signs insisted it was one hour).

You have to walk about 20 minutes once you’ve reached the parking area anyway, so I’d only rent an e-bike if you want to give one a spin for shits and giggles or are just short on time.

Shifen Waterfall is probably Taiwan’s most famous and has been nicknamed “Little Niagara” because the horseshoe shape mimics North America’s most famous waterfall. It’s not as tall nor as wide, at 20 meters high and 40 wide — though it is incredibly powerful. It is, however, insanely beautiful.

The walk to the waterfall is a real beauty, passing two suspension bridges, an insanely turquoise river set into luscious green mountains, and countless photo spots. It struck me when I was there that this is a side of Taiwan that too few people know about.

Most people who haven’t been to Taiwan probably just think of Taipei and Chinese food (if they think about it at all, to be frank).

They don’t think about the verdant green mountains, stunning landscapes, or ease of access to an abundance of different natural wonders within a maximum two hour train ride from the city.

The walk to Shifen Waterfall is easy, and there’s also some cafés here in case you get peckish (though after visiting Shifen Old Street, I’d doubt you are!). The offerings here looked a little less interesting and fresh than on the Old Street, so I’d recommend eating there first.

Make sure you go to the Observation Point Trail past the first major viewpoint of the falls — you can walk nearly all the way to the bottom of Shifen Waterfall where you’ll get the best view and photos (that is why you came, no?).

To get the best photos of Shifen Waterfall, I recommend using a manual camera where you can change the settings. I set mine to f/22 (as high as it could go, to let in less light), 0.5 seconds shutter speed (to keep the shutter open longer), and my ISO to 100 (to decrease light sensitivity).

I balanced my camera on the fence to reduce my hand shaking, as I have perpetually caffeinated twitchy fingers.

If you’re super prepared, which I am never, you’d bring a tripod and maybe some filters to let you take an even longer exposure. But I found with these settings, I was able to get that silky smooth waterfall look I was aiming for.

What Else to Do in the Area

If you’ve finished up in Shifen and are looking to add something else to your day trip from Taipei, I have two suggestions. One is to visit Houtong Cat Village, a village packed with stray cats that’s now become a tourist attraction in its own right. The location is super easy to add on to your Shifen day trip as it’s right on the Pingxi line on the way back to Taipei from Shifen. We didn’t get a chance to visit here, as we ran out of time, but I’m hoping to have a chance to visit on an upcoming day trip from Taipei.

What we did instead was return to Ruifang and then catch a bus to Jiufen in time for sunset. As soon as you step off the bus in this hillside town, you’re treated to epic views of Taiwan’s beautiful, temple-studded coastline.

Climbing up through the Old Town, you’ll get even better views which you can enjoy with a sunset cup of (overpriced) coffee or dessert.

Once the sun is down, thousands of orange paper lanterns light up the streets and it becomes incredibly crowded — even on a normal-seeming Monday night in the middle of winter. Still, even with all the crowds, it’s beautiful and quite easy to combine Shifen and Jiufen into a one-day trip from Taipei. We did this independently with public transportation, but if you are concerned about figuring out the transportation systems in a country with Chinese-language signage (which admittedly can be a bit tough to navigate), I recommend this inexpensive Taipei-Shifen-Jiufen-Taipei return shuttle which is inexpensive at around ~$20 USD and well-reviewed by nearly 3,000 travelers. 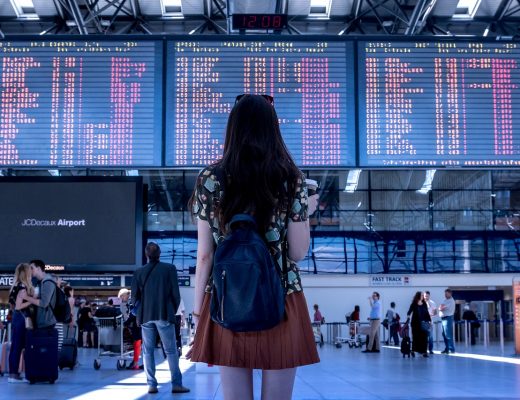 Taoyuan Airport to Taipei: How to Get from Taipei Airport to City Center 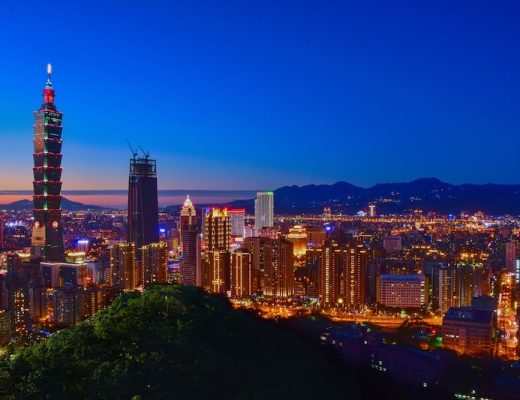 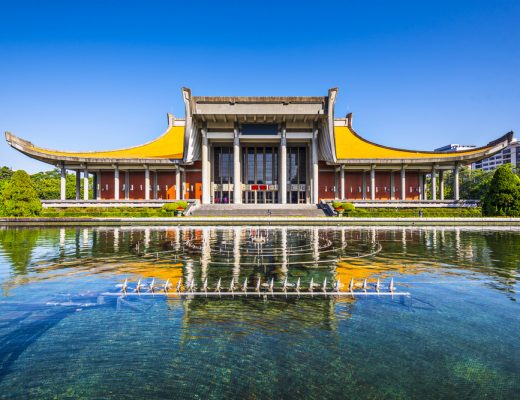 One Day in Taipei: A Perfect Layover in Taipei

August 2, 2019
Previous Post Take Me Back to Kanuhura
Next Post Is Nicaragua Safe? My Perspective and Recent Safety Updates