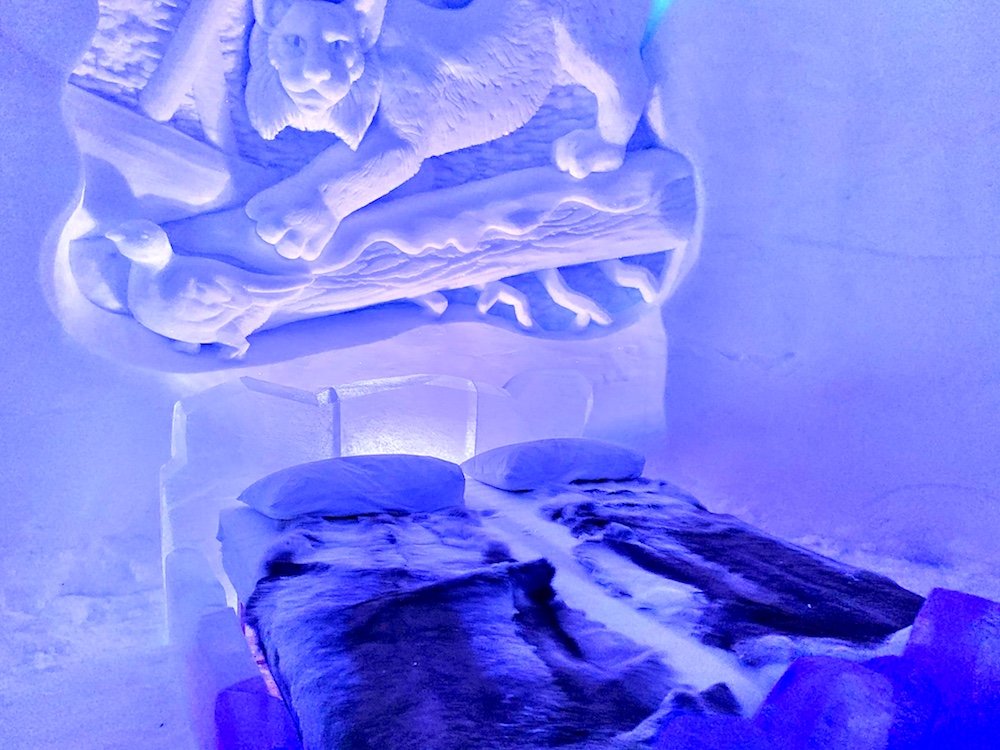 What’s It Like to Visit the Tromso Ice Domes?

Of all the things I wanted to do in Tromso this winter, visiting the ice hotel in Tromso, the Tromso Ice Domes, was high up on my list.

I mean, a hotel that’s entirely constructed of ice and snow, rebuilt each year in the middle of a frozen-over valley above the Arctic Circle? What’s not to love?

However, while the ice hotel may be called the ‘Tromso Ice Domes’, it is most definitely not in Tromso — in fact, it’s nearly a hundred kilometers away, necessitating either a rental car or a guided tour in order to visit the ice domes.

Therefore, I’ve decided to write this guide to visiting the Tromso Ice Domes to break down how to exactly to visit this popular attraction in Tromso. Luckily, it’s easier than you might think, though it being Norway, be prepared to spend a pretty penny!

What are the Tromso Ice Domes?

The Tromso Ice Domes is a hotel made entirely of ice outside of Tromso, Norway, about an hour and half’s drive away from Tromso city center.

It’s a relatively new attraction — the most recent season, the 2019-2020 season, was only its third year in operation, so there is not a lot of information on the internet about it yet.

But despite being a fairly new attraction, it’s one of the must-do excursions in Tromso, and if you have more than two days allocated for visiting Tromso, I definitely think the Tromso Ice Domes warrant a visit.

Are the Tromso Ice Domes really made of ice?

Yes! The Tromso Ice Domes are constructed every year from scratch. It takes about one month to construct, and each year, builders use several thousand tons of ice from a nearby river in order to build the ice hotel.

The actual structure is constructed by blowing up giant balloons to create the ‘dome’ structure, and then the ice blocks are built up around the domes and then melted together in order to create a solid ice structure. They also invite ice carvers to create ice sculptures for the interior of the hotel, and each year, the themes and carvings differ.

Structurally, the ice is 3 meters thick on the outer walls and about a meter thick at the top, and it’s a rather roomy structure — not a cramped igloo-like structure, but actually really spacious and roomy.

On the interior, basically every single thing is made of ice – from the chairs and tables in the restaurant to the ice bar itself to the bed frames. Seating surfaces are covered in reindeer pelts in order to keep you warm.

They demolish the ice domes at the end of the season, though being made entirely of ice, they would just melt away as summer set in on Northern Norway.

All in all, the Tromso Ice Domes are open from December 10th to the end of March each year, just over 3 months of operating time each year!

How to get to the Tromso Ice Domes

The most popular way to visit the Tromso Ice Domes is via a guided tour and shuttle bus which departs from Tromso. This is the exact tour I took, which I highly recommend — it was a definite highlight of my time in Tromso.

If you aren’t planning to rent a car when in Norway (and I don’t recommend it unless you are a very experienced winter driver, as the road conditions in Norway in winter can be quite treacherous for the inexperienced), a guided tour with a dedicated shuttle bus is the only way to get to the Tromso Ice Domes as public transportation will not take you here.

The most popular package is to combine a visit to the Tromso Ice Domes with a snowmobiling ride through the stunning Tamok Valley where the ice hotel is set.

I was aching to do this, but unfortunately, the snowmobiling portion of the tour requires that you have a valid driver’s license in order to operate a snowmobile, and mine just expired, so I was unable to do so. However, if you can, I highly recommend bundling the Ice Domes and a snowmobile ride as the area around the ice hotel is truly spectacular and I wish I had more of a chance to explore it.

Book your Ice Domes visit with a snowmobiling add-on today!

If you are renting a car on your trip to Tromso, you can arrive at the Ice Domes independently and pay for a guided tour upon arrival, which costs 499 NOK (about $54 USD) per person, so you can save a bit of money if you’ve already rented a car.

The guided tour is at noon daily, and you can stay around the area for as long as you’d like, having lunch at the restaurant, meeting their reindeer, walking around the premises, etc.

What you’ll see at the Tromso Ice Domes

The tour of the Tromso Ice Domes lasts about two hours, and you’ll start off in their Ice Cinema, watching a brief informational movie about how the Ice Domes are constructed.

The Ice Cinema is a gorgeous introduction to the Ice Domes, an amphitheater-style room made of snow and ice. Learning about the effort involved in constructing the Ice Domes while sitting inside of the fruits of that labor is a really cool experience!

Following the quick briefing in the Ice Cinema, you’ll visit the rest of the Ice Hotel, starting in the ice bar and restaurant room. Here, you’ll enjoy a shot (alcoholic or non-alcoholic options were provided) in a cup made entirely of ice from the ice bar, while sitting at a table made of ice on ice chairs!

There are some cool decorations in the ice bar, including a very Instagrammable ice throne which everyone gets really excited to take pictures in. I suggest waiting until you have free time to explore the ice hotel after you see the ice rooms, as then you’ll have fewer crowds to contend with and it’ll be far easier to get some good photos here.

Next after the ice bar area comes the part you’ve probably been the most curious about — the ice hotel bedrooms themselves!

As with the rest of the property, the rooms are made entirely of ice as well, right down to the bed, which is made of a block of ice with a mattress covered in reindeer pelts to add warmth. A thermal sleeping bag and warm accessories will help you get comfortable should you stay in the night here!

After getting briefed on the ice bedrooms, you’ll have about 40 minutes at leisure to explore the Ice Domes.

I recommend taking photos to your heart’s content before heading over the warm room where you can order a delicious lunch — when I was there, they offered a fantastic lunch special of a bowl of creamy fish soup with unlimited coffee for 199 NOK (about $21 USD, which is about normal for lunch in Norway).

You’ll also have a chance to briefly visit and feed the reindeer their favorite treat – some lichen – should you want to while you’re visiting the Ice Domes!

After your free time, it’s back on the bus, where you’ll head back to Tromso via some of the most beautiful roads you can imagine.

Of course, the Tromso Ice Domes is a true ice hotel, and that means you can spend the night here!

I didn’t do this, as at over $1,000 USD a night for a room, it was well out of my price range… but if you’re visiting Norway for a special occasion like a honeymoon or anniversary, you’re a baller, or you just really are living that YOLO mindset, you may want to splurge on staying the night!

If you’d like to stay at the Ice Domes, you can book here, which includes a guided tour, welcome shots, dinner cooked on a campfire while out in the Norwegian wilderness, an evening snowshoe tour with the possibility of Northern lights photography, breakfast, and a morning self-drive husky sled ride, plus transfers.

If you need to borrow any warm clothing or equipment, this can also be arranged with the hotel. The hotel will also provide everything you need to sleep warmly, including expedition-strength sleeping bags, which keep you so toasty warm that you can sleep in only thermal underwear!

What to bring to the Tromso Ice Domes

Inside the Ice Domes, the temperature is kept a constant -5° C / 23 °F due to the insulating effects of the ice — so even if it is much colder outside, it will always be -5° C inside.

I recommend wearing a thermal top and underwear/leggings, jeans or snow pants and a sweater on top, a warm down jacket as your outer layer, and cold weather accessories (hat, waterproof gloves, and scarf).

I also strongly recommend bringing crampons, which are little spike traction slip-ons for your shoes, as the area around the Ice Domes can get quite slippery! If you’re not sure what to bring and you need more guidance, I have all the winter clothing and products I recommend listed on my Norway winter packing list.

Of course, you’ll definitely want to bring your camera as well for all the amazing photos you’ll take during your stay.

If you’re staying overnight, you’ll want to also bring whatever toiletries, medicine, a change of clothes, etc. that you would need for an overnight stay.

On a budget but don’t have a rental car? The basic guided tour plus transport is the way to go.

Want to add a little adrenaline to your day and make your trip a bit more memorable? Opt for the snowmobiling add-on and Ice Domes visit for a special experience.

And for the most memorable experience of all, an overnight stay in the Tromso Ice Domes is one for the bucket list. 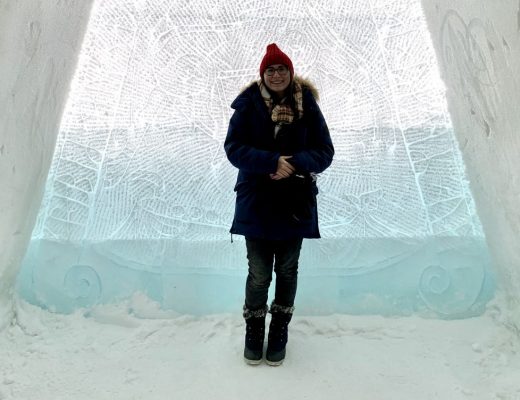 What to Wear in Norway in Winter: Your Norway Winter Packing List